What are the daytime populations of the major cities in Israel?  How do Tel Aviv and Jerusalem stack up against each other?  The number of people who spend the day in these cities rises every morning, when tens of thousands of people enter the city for employment, education and other activities. 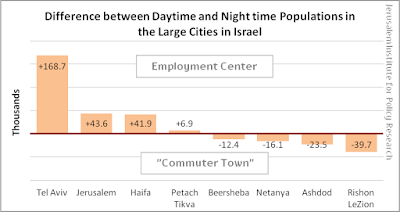 According to population statistics published by the Central Bureau of Statistics, in 2016, 874,200 people lived in Jerusalem, half that number in Tel Aviv (435,900) and one-third that number in Haifa (279,200 residents).

These are the numbers of permanent residents in these cities, but since they are major metropolitan areas, the number of people who spend the day in these cities rises every morning, when tens of thousands of people enter the city for employment, education and other activities. These metropolitan cities function as employment centers for people who live in nearby commuter towns.

According to the CBS Labor Force Survey, the city with the highest number of incoming daily commuters is Tel Aviv. Some 257,000 people commute to work in Tel Aviv every day and live elsewhere.

This number is larger than the number of people who live in Rishon LeZion, the fourth largest city in Israel. Some 80,200 people travel to work every morning to Haifa and 77,100 to Jerusalem. These numbers do not include students and other people who are traveling to the cities for errands and other activities.

Jerusalem is a unique case in this respect, since the city is made up of extremely large neighborhoods, each of which is the size of an average Israeli city. In a subsequent column, we will try to estimate the “daytime population” of Jerusalem’s employment centers, compared with the “commuter towns” within Jerusalem’s city limits.