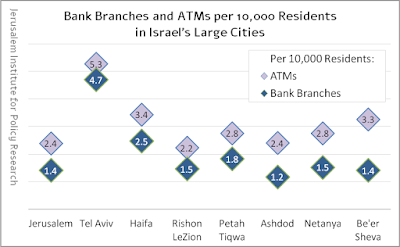 In a world where most bank transactions can be dealt with over the Internet, are physical banks a vanishing phenomenon? We might assume that for a growing sector of the population there is no need for a physical branch, but based on the crowds at some of the banks it seems that there are still those who avail themselves of the services.

According to data from the Banking Supervision Department at the Bank of Israel, there are 1,294 active bank branches in Israel today, 206 (16%) in Tel Aviv, 124 (10%) in Jerusalem, and 69 (5%) in Haifa. In 2017, 15 bank branches were opened in Israel, while 46 were closed (including one which was opened that same year), so that there was a negative balance. It should be noted that some of the branches that appear on the list are not general service points, but specialize, providing mortgage or investment services, while some don’t supply any services at all, such as the administrative branches.

A comparison of the number of branches in a specific locality to its population size creates an index that presents the integration between 1. The quality of the banking services provided to the residents of the locality who need to use the bank, and 2. The centrality of the locality as a provider of services in its area. In Tel Aviv there are 4.7 bank branches per 10,000 residents (and it is second only to Rosh Pina in the number of branches per 10,000 residents). Like Rosh Pina, the other localities, following Tel Aviv, are relatively small, but function as commercial centers for the surrounding regions – such as Kochav Yair (4.4 branches to 10,000 residents) and Kfar Ya’assif (4.1). In Jerusalem, the ratio is relatively low, and stands at 1.4, and also among the other large cities, only in Ramat Gan (3.5) and in Haifa (2.5) is the ratio higher than 2. It appears that the network of branches is organized in such a way that people will not necessarily receive service in the neighborhood where they live, but also won’t have to travel too far to get what they need. Tel Aviv’s prominence is also lower, when taking into account that its daytime population is 40% larger than its permanent population.