There is an increase in women in the Hi-Tech industry.  Will there be a continuous increase in the amount of women employed in the industry?  Hi-tech sector is an important growth engine for the Israeli economy. 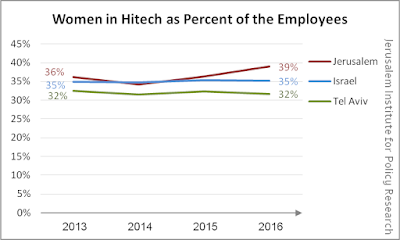 Hi-tech sector is an important growth engine for the Israeli economy. The number of hi-tech companies in Jerusalem has been consistently increasing since 2013, with an overall growth rate of 52%.

Companies in Jerusalem account for 6% of the entire Israeli hi-tech industry. For the last four years, 100 new hi-tech startups have been created each year.
Is this growth reflected in the percentage of women employed in the industry? Unfortunately, this is not always the case.

The total number of workers in the Israeli hi-tech industry rose from 272,200 in 2013 to 310,300 in 2016. The percentage of women employed in the industry has remained stable throughout the different regions in Israel. For example, in Tel Aviv, women make up one-third of employees in hi-tech companies, a statistic that has remained constant in recent years.

In Jerusalem, however, the situation has improved in recent years. In 2016, 39% of hi-tech workers were women, which is 3% higher than it was in 2013. In fact, in the biotech sector, women make up the majority of employees. In new biotech companies, women make up a whopping 59% of employees. One possible explanation for the high number of women working in biotech is their preference for studying subjects such as life sciences, as opposed to subjects like computer sciences.