Why is there a lack of housing in Jerusalem?  Will there be a continuation of construction of apartments?  Planning is required if you want to build apartments. 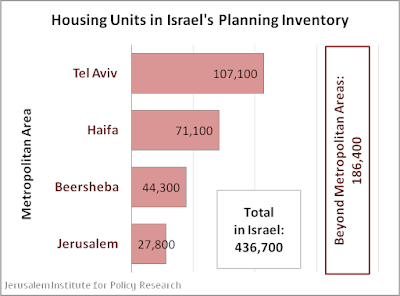 Planning is required if you want to build apartments. When there is a dearth of apartments, a question that arises is: Is there a lack of apartments today because the scope of the planning wasn’t wide enough or because the construction process is too slow and can’t keep up with the planning? This debate is at the core of the argument about the future of the Committee for Preferred Areas for Housing (CPAH). Following a government decision, the Planning Administration and the Israel Land Authority provide the public with a database which includes all the apartments that exist “on paper” and their various planning stages, via the website data.gov.il. This database is the residential planning inventory. We have tried to examine the scope of the Jerusalem apartments that are currently in the planning stages.

The planning inventory of all the apartments in Israel stands at 436,700 apartments, of which 8,900 (2%) are in Jerusalem. The cities with the largest planning inventories are not the big cities which comprise the nuclei of the metropolitan areas – in those areas they have “run out” of room to build – but rather mostly medium-size cities such as Ashkelon, where the number of planned apartments in the inventory stands at 27,800, Kiryat Ata (21,400), and Lod (15,900). The apartment inventories in Haifa and Tel Aviv are lower than that of Jerusalem, and number 6,500 and 3,900 respectively. With respect to the apartment inventory in Jerusalem, for 3,400 apartments (38%) the plans have already been approved, while the others are in earlier planning stages.

Will construction dwindle in the big cities once the apartments in the current inventory have been built? Not necessarily. The planning inventory included with this data does not take into account urban renewal or National Masterplan 38 (NMP38), which as we saw in this column, encompasses within its framework alone a further 3,550 potential new apartments in Jerusalem. It seems that urban renewal, or “compressing” the existing building situation is the principal option for housing development in the city.