Are You Lonesome Tonight?

Main Blog Are You Lonesome Tonight?

Are You Lonesome Tonight?

To determine if women or men are more lonely, it depends on which city they live in.  Which situations do women and men feel lonely?  Are there situations in which you feel lonely? 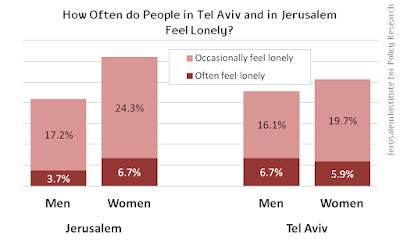 The Central Bureau of Statistics Social Survey for 2016 posed the following question to its respondents: “Are there situations in which you feel lonely?” While working on this weekly column I came across that question, and I wondered – would I have answered that question honestly? And on a government survey? Which of the four options (often, sometimes – from time to time, infrequently, never) would I have chosen? I’m still not sure, but in the meantime, this is what the existing data reveals…

To what is the sense of loneliness connected, among Jerusalemites?

I assumed that there would be a correspondence between the level of loneliness and the quality of family relationships. The Central Bureau of Statistics looks into this as well, and asks: Are you satisfied with your relationship with your relatives? There were insufficient respondents to the options that express dissatisfaction or complete dissatisfaction and so the sampling error doesn’t allow for the presentation of the data, which means that I can’t reinforce or rule out my assumption. Still, the 21% of the women in Jerusalem who report a frequent feeling of loneliness is comprised of 6.3% who are “very satisfied” with their family relationships, and 14% who are only “satisfied.” Among the 31% of women in Jerusalem who feel lonely now and again, 8% are “very satisfied” and connected to their families, while 20% are only “satisfied.”

And what of the family status of the respondents?

And maybe, after all that, we can sum up and conclude that a sense of loneliness is part and parcel of feelings of human existence, and it’s just as natural to feel loneliness as any other feeling. However, if you still feel overwhelmed, don’t keep it to yourself – it’s probably a good idea to seek help, or company.