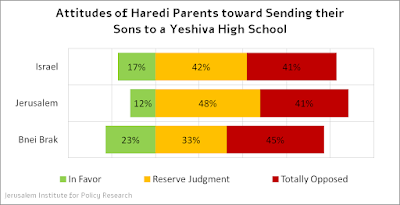 In recent years, the demand to study at yeshiva high schools has increased among the Haredi public in Israel. At yeshiva high schools, alongside religious studies students learn general subjects and follow the curriculum for the matriculation examination. This new interest reveals deep processes at work in Haredi society that indicate a desire for integration into the employment market, which is often the result of the aspiration to earn a decent living, and sometimes a wish to be a more significant part of general Israeli culture.

Studies for boys in the Haredi sector begin at age three. That is the age when a boy enters the Talmud Torah or heder and starts to learn how to read. Studies at the Talmud Torah continue until age 14 (the end of eighth grade), and include many hours of religious study –Torah study, Halacha (religious laws), Mishna, Gemara, Musar and World View – as well as general subjects which include math, geography, nature studies, history and more. English and other foreign languages are rarely included, and there is minimal, if any, “enrichment,” in subjects such as technology, computers, art, or physical education. In the higher grades there are more religious studies at the expense of the other subjects. After completing the studies at the Talmud Torah, the haredi youth continues to a “small” or “junior” yeshiva for the next three years (parallel to grades nine through 11). Only religious subjects are taught at the small yeshiva.

This means that a graduate of the Haredi school system receives a rich education in religious studies, but his level of education in all other areas is roughly equivalent to a student in grade five or six in the state systems. Therefore, entry into the work force, as well as into higher education in the country, is effectively blocked to these Haredi graduates.

Research undertaken at the Jerusalem Institute for Policy Research indicates a trend that shows that more and more members of the Haredi community are interested in changing the situation and providing their sons with the tools and the possibility of receiving a broader education starting in high school, to enable them to earn a decent living, or because they believe that the true “Way of the Torah” includes preparedness for a practical life.

In a survey of 450 men and women who are representative of Haredi society, 17% of respondents said that they would have no problem sending their sons to a Haredi yeshiva high school. Alongside 41% who responded that under no circumstances would they be willing to send their sons to an institution that combines secular studies and preparation for the matriculation exam (which is representative of the prevailing approach in Haredi society today), a similar number of respondents said that they wouldn’t rule out this possibility. The survey data shows that in the coming years a potential 5,000 additional students may attend Haredi yeshiva high schools.

The results foresee a growing phenomenon, which may have far-reaching influence on the employment market and the integration of the haredi population into the larger community in Israel, and we would be advised to pay attention.