Jerusalem is in the top 25 most densely populated cities.  In order to determine this, researchers measured the number of housing units per durnam. It seems that in terms of the ratio of population to jurisdiction area, the density isn’t that pronounced in Jerusalem. 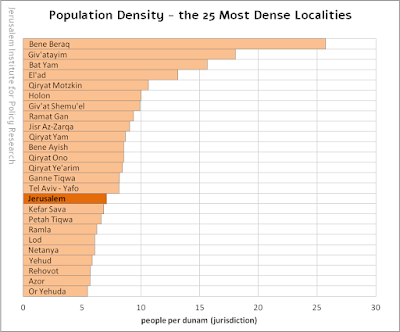 Jerusalem is home to one tenth of Israel’s population, and is the second largest Local Authority in Israel, in terms of its area of jurisdiction. Only Dimona, which enlarged its area with the addition of the Nevatim Airbase, precedes it.

But just how great is the population density in the city?

As for Dimona – 0.2 housing units per built-up dunam in this southern city…