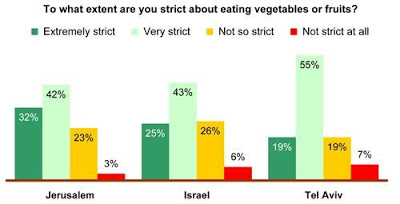 In recent years we have seen an increasing awareness of healthy nutrition. Every few months, new research findings shed light on various aspects of good nutrition such as recommended foods, foods that should be avoided, and vitamins and minerals whose consumption is especially important. Chain store shelves are stocked with new “health” products. If in the past we settled for eating a bread roll or pita, today we are exposed to a variety of breads made of whole wheat, rye, and various grains. Ingredients that were known to only a few in the past, such as Omega-3 or bifidobacteria (bio yogurts), have received widespread public recognition, and today they are being added to many foods as part of the effort to market these foods as “healthier” than the competition. “Healthy” foods such as quinoa or whole grain (brown) rice are popular in many households these days.

In this context, the 2010 Social Survey of the Central Bureau of Statistics provides interesting data regarding the nutrition habits of Jerusalem residents.

Dieticians advise eating breakfast because it is the most important meal of the day. Compared to residents of other major cities in Israel, Jerusalemites are the “healthiest” in this respect, and 66% of them are strict about eating breakfast every day. This figure compares to 61% of Haifa residents, 57% of Rishon LeZion residents, 55% of Israel’s residents, and 50% of Tel Aviv residents. Accordingly, the percentage of Jerusalemites who reported that they almost never eat breakfast (once a week or less often) was the lowest among the major cities, at 18%. This compares to 21% of Haifa residents, 24% of Israel’s residents, 28% of Rishon LeZion residents, and 31% of Tel Aviv residents.

Another question addressed eating habits regarding fruits and vegetables. Here too, Jerusalemites were found to be the “healthiest.” The percentage of Jerusalem residents who reported that they are extremely strict or very strict about eating fruits and vegetables stood at 74%. This is similar to Tel Aviv residents (74%) and higher than the figure for residents of Israel (68%), Haifa (67%), and Rishon LeZion (66%).

It is interesting to note that compared to residents of the other major cities, Jerusalemites are less strict about examining the nutritional ingredients on food packages. The percentage of Jerusalem residents who reported doing so frequently or sometimes stood at 49%, lower than the percentage for residents of Israel (57%), Tel Aviv and Rishon LeZion (65%), and Haifa (67%).

Source: Analysis of data from the Social Survey of the Central Bureau of Statistics.
< Previous Post To smoke or not to smoke?
Next Post > Networked

Eating healthy these days is kinda hard to achieve because of fast living. We now like to eat fast foods that really give use tons of carbs.