Main Blog To smoke or not to smoke? 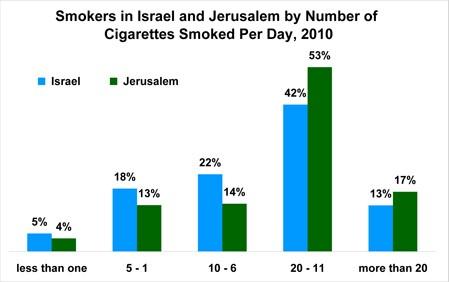 During 2010, the Social Survey of the Central Bureau of Statistics explored the issue of health in depth and collected a large amount of data about cigarette smoking in Israel. Approximately 1,270,000 individuals aged 20 and above reported that they currently smoke. This figure represents 27% of Israel’s population for the 20+ age group. Among these smokers, 64% are men and 36% are women. In Jerusalem, 105,000 individuals indicated that they currently smoke, representing 24% of the city’s population aged 20 and above. This is lower than the figures for Tel Aviv and Haifa, where the percentage of smokers among the population’s 20+ age group is 32% and 29% respectively. In Jerusalem the ratio of men among the smokers was relatively high (75%) compared to Tel Aviv (55%) and Haifa (58%).

Today 39% of smokers in Jerusalem are trying to quit. Jerusalemites who had smoked in the past indicated that their main reason for quitting was a health problem or health concern (70%), family and societal pressure (8%), or an aesthetic problem (6%). Less than 1% indicated that they quit smoking because of the high financial cost.

And what about passive smoking? In 1983 a law was passed to prevent smoking and exposure to smoke in public places, including workplaces. Despite this, approximately 338,000 individuals in Jerusalem, representing 77% of the population aged 20 and above, reported on exposure to smoke in their workplaces. Among these, 45% are exposed to smoke to a large or very large extent.

Source: Analysis of data from the Social Survey 2010, Central Bureau of Statistics