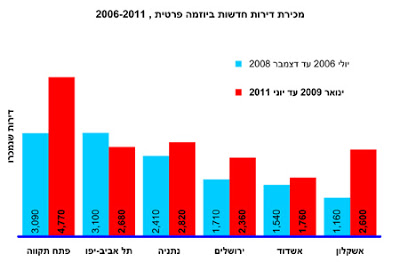 Despite the low figure for the first half of 2011, there has actually been an increase in the sale of new apartments in Jerusalem. During the period from the beginning of 2009 until June 2011 (5 half-year periods), a total of 2,360 privately constructed apartments were sold in Jerusalem – 650 more than during the preceding period of the same duration (July 2006 through the end of 2008).

Similarly, increasing trends were recorded in other cities, foremost among them Petah Tikva and Ashkelon, where apartment sales during this period rose by 1,680 and 1,440 respectively. The opposite trend was recorded in Tel Aviv-Jaffa, Holon, and Rishon LeZion, where apartment sales decreased during this period in comparison to the preceding period.

Compared to other districts in Israel, the apartments sold in the Jerusalem District (including the city of Jerusalem and additional localities) during the first half of 2011 had been on the market a relatively long period of time, measuring from the start of construction until their sale. These apartments remained on the market approximately 7 months (median value), compared to 1.7 months for the national median. For the purposes of comparison, during 2010 apartments in the Jerusalem district were “snatched up” within only 1.3 months, compared to 2.5 months for the national median.

Sources: Survey of New Dwellings for Sale under Private Construction (for the years noted), Central Bureau of Statistics; Statistical Yearbook of Jerusalem, 2011.