As the family unit dynamic is changing, data reveals that Jerusalem has a greater marriage rate and a smaller divorce rate than Tel Aviv, with Jerusalemites marrying at a young age. 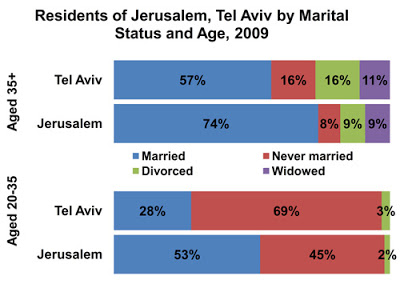 The family unit is undergoing a process of transformation in the modern world. In recent years the public debate surrounding this process and its potential implications for various aspects of society has been increasing. In this context, some interesting statistics regarding the population of Jerusalem are presented here.

According to data of the Central Bureau of Statistics from the end of 2009, a total of 66% of the city’s population (aged 20 and above) were married, whereas 23% were single, 6% were divorced, and 5% were widowed. The percentage of married individuals aged 20 and above in Jerusalem was comparable to the figure for Israel (63%) and much higher than the figure for Tel Aviv (46%). The data indicate that Jerusalemites marry at a young age. Among those aged 20-34 in Jerusalem, about 53% were married (compared to 28% in Tel Aviv). Interestingly, 9% of all married residents of the city were wed before age 24, compared to 4% in Israel and only 1.5% in Tel Aviv.

Divorce rates in Jerusalem were very low. Only 9% of those aged 35 and above in the city were divorced, compared to 16% in Tel Aviv and 14% in Haifa. The percentage of those divorced among the 35+ age group within the Jewish population was higher than the figure for the Arab population: 11% versus 3%, respectively. The percentage of singles within both population groups was identical, at 8%.

Sources: Analysis of Central Bureau of Statistics data, Statistical Yearbook of the National Council for the Child.
< Previous Post Don’t worry be happy
Next Post > The Educational System of Jerusalem