An analysis of trends over the past 10 years reveals that the most significant change occurred within the municipal Arab educational sector, where the number of students increased by 126%. 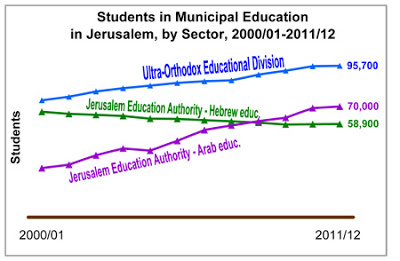 Among students in grades 7-12 (middle and high school), a total of 37% receive a Haredi education, 33% receive a municipal Arab education, and 30% receive a state or state-religious education. At the elementary school level, by comparison, the figure for Haredi students is close (38%), slightly higher for Arab students (38%), and lower for national and religious-national students (24%). Among kindergarten children, the percentage receiving a Haredi education is particularly high – 48% – as compared to the figures for municipal Arab education (28%) and national or national-religious (24%). The percentage of Haredi children in kindergarten is especially high because it is affected by the relatively low percentage of Arab children, many of whom do not attend the municipal kindergartens. A separate analysis of students in the national education system reveals that their percentage decreases in accordance with the following age groups: they represent 19% of the city’s high school students, 15% of junior high school students, 12% of elementary school students, and 10% of kindergarten children.

An analysis of trends over the past 10 years (compared to the 2000-2001 academic year) reveals that the most significant change occurred within the municipal Arab educational sector, where the number of students increased by 126%. This change resulted from the Ministry of Education’s increased recognition of private Arab schools in Jerusalem as “recognized but unofficial institutions,” the construction of new classrooms, which increased the capacities of the schools, and natural population growth. During the same period, the number of students receiving a Haredi education increased by 30%, and within the national and national-religious sector there was a 12% decrease.

Source: Analysis of data of the Municipality of Jerusalem

5 comments on “The Educational System of Jerusalem”

Jerusalem is the capital of Israel. I really impress by this useful information about educational system of jerusalem and israel studies. You have done great work.

thanks a lot for the http://www.masterpapers.com post! very interesting!

Thanks for datas! http://www.online-essay-writer.org/ Very useful to read about education system!

After the launch of the new model, I saw a lot of hands-on photos of the “KOL” in the circle on Weibo
https://www.bestreplicawatches.is/