While the gender gap in religiosity and religious identification is clear with regard to Israeli Jews as a whole, when we take a look at the breakdown of religious practice according to religious sector, the data reveals a more complicated picture.  One of the factors to determine how religious one is their religious affiliation.  It also depends on which part of the world they reside in. 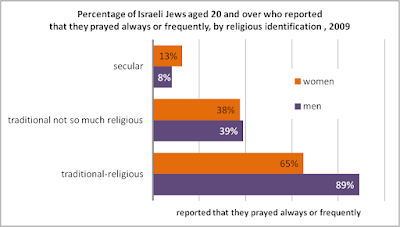 A new study released by the Pew Research Center found that across the world and across religions, women are generally more religious than men. The study, “The Gender Gap in Religion around the World,” found that in all of the 84 countries for which data were available, women are more likely or equally likely as men to engage in daily prayer. Israel however, is the sole outlier in this trend: it is the only country surveyed in which a higher percentage of men than women reported engagement in daily worship, either public or private.

This gender difference also exists in other categories relating to religious practice in Israel. Another recent Pew survey on Israeli society showed that Israeli Jewish men reported higher engagement in religious activities than women. For example, while 37% of Israeli Jewish men attend synagogue weekly or more, only 18% of their female counterparts do the same.
These gender gaps in religious activity may be partially attributed to certain norms in Judaism that prioritize men’s attendance in worship over women’s; for example, among Orthodox Jews, a minyan of ten men is required to conduct communal worship services, whereas women are not counted or halakhically required to take part in this practice.
Notably, however, the gap does not only exist with regard to worship attendance: even among activities that are not tied to male-only commandments, Israeli Jewish men were often recorded as being religiously engaged at a slightly higher rate than Israeli Jewish women. For example, 64% of Israeli Jewish men fasted all day last Yom Kippur, while 57% of Israeli Jewish women did the same. These women are also more likely to travel on Shabbat (65%) compared to their male counterparts (59% of whom travel on Shabbat). On the question of the importance of religion in one’s life, Israel also stood as an outlier in the Pew survey. In Israel, 35% of Israeli Jewish men reported that religion was “very important” to them, as compared to only 25% of Israeli Jewish women. In all other countries surveyed (aside from Mozambique), women were recorded as more likely or equally likely as men to consider religion as personally very important. Notably, among American Jews, these differences were not as apparent.
The gender gap regarding the religiosity of Israeli Jews is also evident in their religious identification, according to the results of the Central Bureau of Statistics’ (CBS) annual social survey, though the gap in this area is quite narrow. Jewish men in Israel defined themselves (or were defined by particular criteria such as school system and residential neighborhood) as ultra-orthodox (9.8%) or religious (10.9%) at a slightly higher rate than Jewish women (among whom 8.4% identified as ultra-orthodox and 10.3% identified as religious). At the same time, Jewish women were more likely to identify as traditional (39.3%) than Jewish men (33.8%).
While the gender gap in religiosity and religious identification is clear with regard to Israeli Jews as a whole, when we take a look at the breakdown of religious practice according religious sector, the data reveal a more complicated picture. For example, the rates of prayer among Jews not defined as orthodox or religious reveal a trend in which the gender gap narrows and even reverses as the sector becomes more secular. According to the social survey, among Israeli Jews defined as “traditional-religious,” 89.1% of men reported that they prayed always or frequently, as compared to 64.9% of women. Among those defined as “traditional but not so religious,” this gap hardly existed: 38.9% of men and 37.6% of women attended prayer. And among those defined as secular, the trend reversed: Women reported praying always or frequently (12.7%) at a higher rate than men (8.2%). Moreover, importantly, this overall religious gender gap does not hold true for members of other religions in Israel. According to the CBS data, women of other faiths (the majority of whom are Muslim) identify as more religious than their male counterparts: 65.4% of non-Jewish women identified as very religious or religious, while only 45.1% of men did the same.
< Previous Post Jerusalem – Toward a fiscal balance
Next Post > The Jerusalem Files