According to the Social Survey in 2019 data a majority (73%) of Israeli residents ages 20 and older agreed, or strongly agreed, that housework should be shared equally between partners. However, it’s a good idea to check whether people really behave in a manner which corresponds to their declarations.

Should couples share the housework equally? One of the topics reviewed in the Central Bureau of Statistics Social Survey in 2019 was family ties, and in this context the respondents were asked, among other things, about housework. A majority (73%) of Israeli residents ages 20 and older agreed, or strongly agreed, that housework should be shared equally. The percentages were similar among men and women, but while women tended to strongly agree with the statement, most of the men were content to just agree.

These findings are encouraging, but it’s a good idea to check whether people really behave in a manner which corresponds to their declarations. First, let’s see which chores people are less likely to share, and then we’ll check whether those who profess that it’s important to share the housework really do so at higher rates.

The tasks that the majority of people do not share are small home repairs, such as changing a lightbulb (63% responded that either they or their partner takes care of this), laundry (60%), cooking (54%), and taking care of financial matters (51%). Among these tasks, laundry, repairs, and cooking are extremely gender-based.

Other household chores, such as shopping and cleaning, are shared somewhat more, or other members of the household help out with them. The chore that is shared the most is taking care of the children. Only 29% claimed that one of the two partners is the major caretaker, 68% responded that they share the task, and others described a different division.

Those who responded that they agree or strongly agree that partners should share the chores equally, really do share them to a greater extent, but in most cases the differences are not significant. When it comes to laundry, for example, the rate of respondents who indicated that they or their partner was solely responsible for this task, decreased from 60% to 57% among those responding that housework should be shared equally. The gender affiliation didn’t change significantly either, where the rate of men who said that they are responsible for the laundry remained approximately the same, changing from 11% to only 12%.

Salary and Gender
By: Omer Yaniv
Looks like the gender pay gap may be shrinking, except in Tel Aviv ... 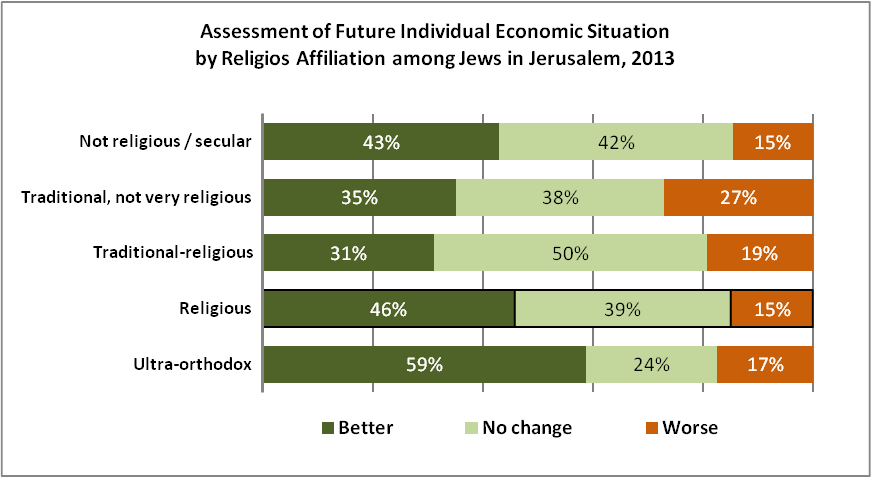 Faith in the Future
One might expect that because Jerusalem is a poorer city in terms of objective indices, its residents would expect a bleaker future, as there would be fewer possibilities for financial savings and fut...