Looks like the gender pay gap may be shrinking, except in Tel Aviv

One of the main reasons for the gaps is that the number of weekly hours worked by male employees is higher than the number worked by women. In Jerusalem, the average number of hours worked per week by a man was 43, as compared to 34 weekly hours worked by a woman. On average, a male salaried employee in Israel, in Tel Aviv and in Haifa, worked 45 hours a week as compared to 37 hours per week for a female salaried employee in Israel in general, 39 hours per week in Tel Aviv, and 38 hours a week in Haifa. 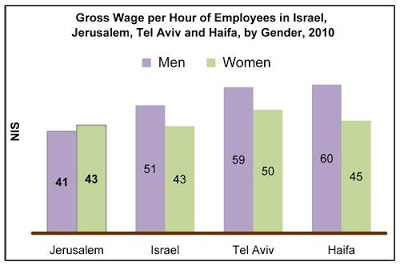 In Jerusalem Women Earn More
By: Eitan Bluer
Large salary and participation discrepancies exist within Jerusalem’s job market. Ultra-orthodox men and Arab women have low participation numbers. In terms of gender, there is a low gap in mont...