Trust in the government appears to be lower than trust in ones local authority, both are declining, and the gap is widening.

A key question in these days of Coronavirus is the degree of trust that the public has in government institutions. It is this basic trust that enables the implementation of policy measures such as the wearing of masks, social distancing, or full closure. It seems that the public’s trust in the government is low, and eroding. The degree of public trust in local authorities (e.g. municipalities) is higher, although it also seems to be declining. That said, it seems that public compliance with instructions is high.

The Central Bureau of Statistics examined civil resilience in the days of Corona in three surveys among people aged 21 and over, the last of which was conducted in mid-July. This survey found that 43% of Jews trust the government to some degree or to a large extent in dealing with the crisis, compared to 71% who trust their local authority. The low level of trust does not necessarily affect obedience, since 99% stated that they wear a mask, and 97% are practicing social distancing.

Trust in the government appears to be on a downward trend, with a figure of 69% in a survey conducted at the end of April. The rate of trust in the local authority is also declining slightly.

Of three measures offered to respondents as ideas that would increase compliance with the instructions, the means chosen by more respondents was better communication of the guidelines (49%) and then free distribution of protective and hygiene measures (26%) and enforcement through ticketing (25%). Among adults aged 65 and over, however, enforcement was in a higher place than the distribution of protective equipment.

Is the Corona Pandemic an opportunity to enhance trust in government?
By: Valerie Brachya
Between January and May 2020, trust in government rose from 54% to 65%, which exceeded the level of trust in NGO’s, business and the media. How can higher levels of trust be maintained and trans... 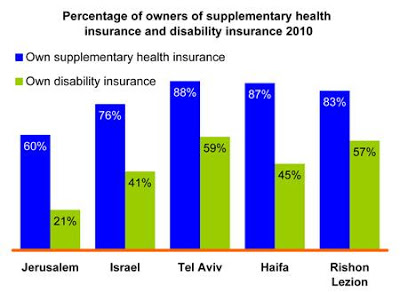 Health Insured and Health Ensured
By: Aviel Yelinek
Healthcare in Israel consists of insurance offered by the Health Maintenance Organizations. Residents turn to supplementary insurance or disability insurance to cover services not provided in the R...