who is satisfied with the parking available in her neighborhood?

Most people agree there’s a serious parking problem in my neighborhood. On the one hand, it always seemed to take me at least twenty minutes to find a place to park, but on the other hand, when I finally abandoned all hope of finding a spot nearby, and looked a little further afield, I would always find parking in a free open lot. I checked, and the distance from that lot to my house is only about 250 meters (including climbing a long staircase). Lately, I have been driving straight to that lot, and so far I have always found a spot there. In this way I also feel that I’m leaving the spots closer to home free for those who may find it difficult to walk or take the stairs. It appears that the serious parking problem is a function of walking distance.

According to the recently-published Central Bureau of Statistics Social Survey for 2019, among Jewish residents of Israel ages 20 and older, about half (49%) think there is sufficient parking in the area where they live. In the big cities, residents are far less satisfied. In Tel Aviv only 30% think there is adequate parking in their neighborhood, in Petah Tikva it’s 32% who feel this way, in Rishon Lezion 34%, in Haifa 39%, in Jerusalem 40% and in Netanya, 42%. Among the Arab population in Israel, only 27% of the residents think there are enough parking spaces in their neighborhoods.

In an attempt to understand the distribution of parking spots – or their scarcity – in Jerusalem, we examined which Jerusalem residents think there is sufficient parking in the area where they live. Among the Jewish population in Jerusalem (of which, as stated, 40% think there is adequate parking in their neighborhood), the more the income per capita rises, the more the rate of people satisfied with their parking situation goes down. Among the lower income group in the city (up to ILS 2,000 gross monthly income per capita in the household), 45% think there is enough parking; among the lower- to middle-income group (ILS 2,001 to ILS 4,000 per capita), 37% feel this way; while among the middle- to high-income group and above (ILS 4,001 and more), only 33% think there is sufficient parking in their neighborhood. Among Jewish residents whose gross personal income is higher than ILS 21,000 per month, fewer than 30% think there is adequate parking. Jerusalem’s Arab neighborhoods are characterized by inadequate transportation infrastructures and the incredibly low number of residents – only five percent! – satisfied with the amount of parking spaces in their neighborhoods reflects this reality. 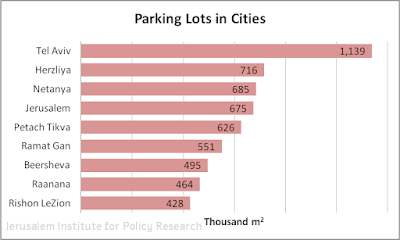 Parking
By: Yair Assaf-Shapira
What is the solution to the harsh situation of parking in Israel?  How can parking in public spaces be easier and more efficient?  Like any other product or service that is in short supply, parking in...