Excess Mortality (Or Not) in Israel in the Year 2020

Excess Mortality (Or Not) in Israel in the Year 2020

After examining the data for excess mortality in Israel, we pose the following question: Has the year 2020, so far, been the deadliest of the last twenty years, or is the opposite the case?

There is a debate raging against the backdrop of the war on the Coronavirus pandemic, which centers on the question: Is this really a pandemic? Large segments of the public claim that the situation isn’t really so bad, and certainly doesn’t warrant the measures which have had such drastic effects on the economy. On the other hand, posit others, among them the Ministry of Health, it isn’t easy to explain matters when the issue is an illness – especially one that may result in complications even after a person has recovered.

Those who downgrade the severity of the illness brandish the excess mortality data for COVID-19, which, happily, are low in Israel. The opposing camp claims that general mortality rates must be examined, to ascertain whether there is mortality which does not derive directly from COVID-19, but is only indirectly connected to the illness, such as negligence with respect to seeking medical treatment, heart diseases which worsened because of the Coronavirus, etc. This can be checked by examining all cases of death, in an attempt to identify whether there is “excess mortality,” or in other words, more cases of death overall than usual.

At first glance the answer seems to be yes. In Israel in 2020, the months January to June were the deadliest in the past twenty years, except for 2019. An examination of the second quarter of the year, from April to June, reveals that 2020 was the deadliest year, in that the number of deaths in that period was higher than the number of deaths in every second annual quarter since 2000. When I brought these figures to the attention of my colleagues, I received a comment that this trend is the result of, among other things, an increase in the population. As I saw it, the normalization of the population size wouldn’t affect the trend, but I took up the challenge.

With admittedly little faith I set to work to organize the data according to population size. I chose the datum of the average annual population, whereas for the year 2020 I estimated the average population size (the figure for which, by the way, is only published at the end of the year) by multiplying the population for 2019 by the percentage of growth from the previous year.

The data was unequivocal and the very opposite of the previous finding. When examining the number of deaths per million people in the population, it emerges that, to date, 2020 has been the least deadly year over the past twenty years. In the first half of the year, for every million people in Israel, 2,573 died, which is the lowest number of deaths per million, at least since the year 2000. The graph illustrates the trend over a period of months. However, it is important to note that there is still more data to consider to substantiate this assertion, such as the age-standardized mortality rate.

Does the absence of excess mortality mean that there is no pandemic? I would say no. The occupancy rate in the COVID-19 wards is very high (at Jerusalem’s Hadassah University Hospital – Ein Kerem, and the Shaare Zedek Medical Center the figures are currently 170% and 110% respectively), and the number of patients on ventilators is rising. The heartening news is that at the moment the number of deaths is not high, but there is a great gulf between the present situation and an assertion that things aren’t that bad.

Generally, the population data for the previous month are not available. However, the efforts of Gai Zomer (Meida La’am), along with the cooperation of the Central Bureau of Statistics (CBS), enabled the preparation and publication of the data by the CBS, and this is the place to express our gratitude.

Take care of yourselves, and if possible, of others too.

The data for July, August, and September look less good. The number of deaths in August 2020 was higher than in most of the months of August over the past decade. To view the data, click here. For additional data regarding excess mortality in comparison with other countries and organized according to age groups, see for example the website mortality.org. For a representation of these data regarding the 85+ age group, see for example ourworldindata.org. 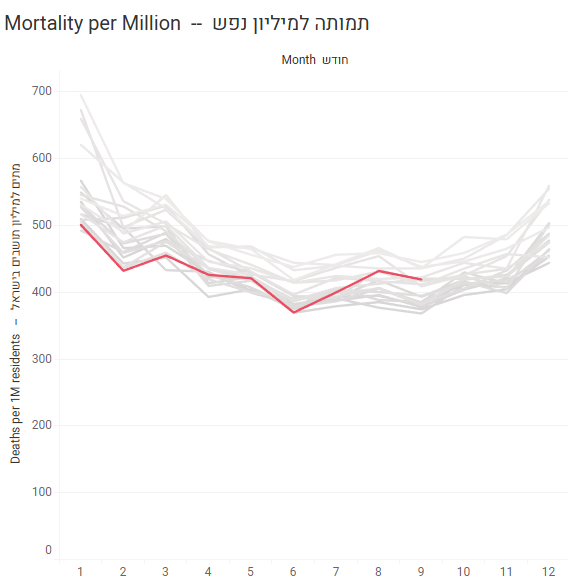 Corona Testing
By: Yair Assaf-Shapira
Children were under represented among the tested for Coronavirus, at least until the current outbreak in a few schools ...