The anticipated mortality rate foreseen from the Coronavirus, as opposed to the mortality rate during an “ordinary” year is not clear to the Israeli public. For the sake of comparison, during the 2003 SARS outbreak, 8,096 people across the globe contracted the disease and 774 died. Meanwhile, in an ordinary flu season the estimated global mortality rate from the flu ranges from 1.5 to 200,000 million cases.

In recent weeks we have witnessed great interest in calculations about the morbidity rate of the Coronavirus and the ensuing anticipated mortality rate in Israel. Confronted with the extremist scenarios presented to the public by the Ministry of Health, in the hope of preventing the worst possible outcomes (as published in the Hebrew press by Dr. Irit Lekser in the Ma’ariv daily and the Twitter account of Moshe Bar Siman Tov) and the more calming scenarios from the renegade skeptical experts (also published in Hebrew by Dr. Dan Yamin in the Haaretz daily and Prof. Yoram Lass in Globes), who compare the magnitude of the anticipated mortality rate from the Coronavirus to the mortality rate in an “ordinary” year – the general public seems to be at a loss. So in the framework of our weekly statistical column, the Jerusalem Institute for Policy Research has decided to shed some light on the issue.

Age Groups and Mortality Rates in Israel and in Italy

The Israeli Ministry of Health published statistics which show that in Israel the general mortality rate, adjusted for age, is low when compared to most countries in Europe and to the United States, and high in comparison with others: In 2015, the mortality rate in Israel was 896 to 100,000 people, which was high in comparison to the rate in Spain (864) and in Italy (886). In 2017, it was reported that half a percentage of Israel’s population of that year, or 44,596 residents of the country, died.

According to The Italian National Institute of Statistics (Istat) website, 598,670 people died in Italy in 2014, of a population of 60 million (an adjusted rate of 85.3 deaths per 10,000 residents, which is lower than the rate documented above for 2015).

What about Morbidity and Mortality from the Flu?

According to a report presented to the OECD in 2007, during a regular flu season, the anticipated global mortality rate from the flu ranges between 1.5 and 200,000 million cases, and one cannot predict exact numbers.

A scientific article from 2019 titled, “Investigating the impact of influenza on excess mortality in all ages in Italy during recent seasons (2013/14–2016/17 seasons),” notes that as of 2017, in Italy 6.7 million citizens, or ten percent of the population, was above the age of 75. The mortality rate of this age group is naturally higher and stood at about four percent. At the same time, the number of those who died of the flu exceeded what was anticipated and the article notes that this number could have been reduced by increasing the rate of vaccinations among the older population.

It appears that global medical research tends not to publish exact figures about mortality rates related to the flu or at least does not make them accessible to the general public. The Israel Ministry of Health exhibits the same approach in its reports.

The Final Report for the 2018/2019 Flu Season, states that in that flu season the morbidity rate of the flu at the peak of the season was high in comparison to the 2017/18 season, and also in comparison to the previous season, in 2016/17. The highest morbidity rates related to flu symptoms were foreseen among infants, children and youth up to the age of 18. Following vaccinations in the community, the morbidity rates among those aged 65 and older were low (about 60% of this age group was vaccinated, as compared to about 18% of infants and children up to the age of five).

Pneumonia is considered a common complication of the flu and a central factor in the calculation of mortality resulting from the flu. According to the report, during the 2017/18 flu season, the percentage of deaths caused by pneumonia was about what was expected for the season, barring a two-week period when a deviation beyond the epidemiological threshold was predicted (where exceeding the threshold represents an increase beyond the predicted data).

The Health System Preparedness Plan for a Flu Pandemic, 2007 is the most up-to-date official source we could find which states absolute numbers (if you’re aware of additional data, please write to us in the comments section below). The plan states that every year between 500 and 1,000 people in Israel die of the flu. At the same time, unofficial data show that in recent years, on average, there were 134 flu patients in serious condition, and 41 died of flu. According to the Ynet news website, in 2019 there were 54 deaths from the flu, and in 2018 there were 127 deaths from the flu. In the absence of official numbers it is difficult to know whether these figures take into account the complications that may accompany the flu and deaths from pneumonia, which may add hundreds of cases of deaths annually to the basic data.

For the sake of comparison with this data, and in an attempt to understand the gaps between mortality caused by the Coronavirus and mortality in an “ordinary” year, it is noteworthy that according to the statistics published by the World Health Organization about SARS in 2003, in the entire world 8,096 people contracted the disease, of whom 774 died. As of this writing, on March 25, 2020, the online Worldometers live Coronavirus Update shows that 445,800 people across the world have contracted the Coronavirus, and 19,800 have died of it. In Italy 6,820 people died of the virus, out of a total of 69,176 verified cases. According to that straightforward calculation, the terrible mortality rate in Italy is 9.85%, part of which may be connected to the high percentage of elderly people in the Italian population.

Health Ministry scenarios concerning the Coronavirus, as published in the media as of March 5, 2020, project between 8,600 and 22,000 deaths in Israel. The gap between the bad scenario and a worse one is based on the basic reproduction number of infection – which leads us to urge everyone to please follow the basic guidelines – stay home, maintain the recommended social distance, and take care of yourselves.

Have you joined us? Sign up for Blog Updates every two weeks

Google Measures the Lockdown
By: Yair Assaf-Shapira
Google’s COVID-19 Community Mobility  Report shows the lockdown and the exit, based on cellphone geolocation. We looked at workplace trends in Israel and a few countries in Europe. ... 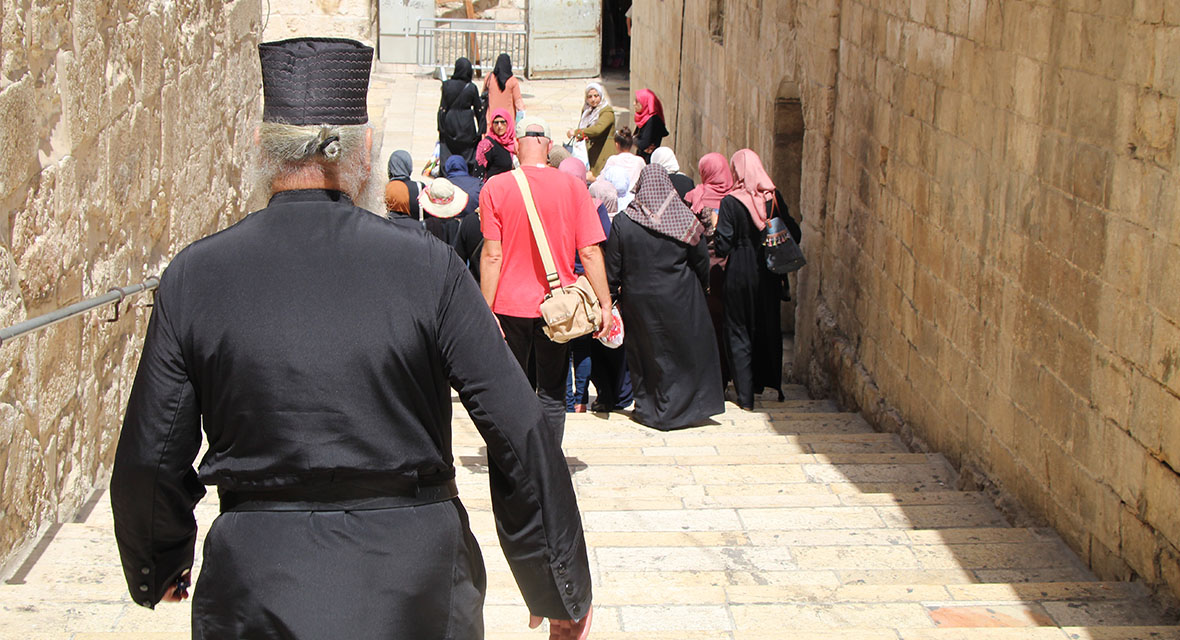 Jerusalem – Holiness in the shadow of the Coronavirus
By: Dr. Amnon Ramon
The most distinctive feature of Jerusalem, which has shaped the city more than any other factor in its history, is its holiness to the major monotheistic religions. Among the city’s holy sites, ...