Main Blog Is the Corona Pandemic an opportunity to enhance trust in government?

Between January and May 2020, trust in government rose from 54% to 65%, which exceeded the level of trust in NGO’s, business and the media. How can higher levels of trust be maintained and translated into better governance?

The Edelman global trust barometer compared results of surveys of 10 countries in January and in May this year. The results showed that trust in government rose from 54% to 65%, which exceeded the level of trust in NGO’s, business and the media. They reported that the public expects the government to end the pandemic and to address its economic consequences. The question is whether governments can maintain the higher levels of trust over time as we exit the pandemic.

Democracy requires a certain lack of trust to hold governments accountable to the public. However, public institutions around the world, both at national and local levels, are concerned that trust in them is seriously eroding.  Some studies have focused on a loss of political trust, following Brexit in the UK and the election of Trump in the US, both of which were attributed to a loss of trust in current institutional systems. Others have focused on a loss of trust in the media with the rise of disseminated unknown and unverified sources of reporting.

Globally, there is a relatively high level of trust in the Nordic countries, a lower level of trust in eastern and southern European countries and in ex Soviet Union countries and a low level of trust in countries of the Middle East, North Africa and Latin America. China and Vietnam have high levels of political and social trust. Citizens criticize local officials for failure to deliver services but do not allocate the blame on national government. When China issued commands for isolation to Wuhan inhabitants, they were obliged to comply and accepted the authority of the Government. Italy and Spain could not expect such a level of compliance.

However the Edelman survey in May showed a different picture. After the severity of the pandemic was well appreciated by people around the world and the differences in response of governments was reflected in the huge differences in mortality rates, people apparently showed a much higher level of appreciation of government at the national level. Responses showed that Government achieved a much higher level of trust than before, 65%, above NGO’s (62%), business (62%) and the media (56%). Trust in government leaders rose from 48% to 61%. The highest gains in trust occurred in the UK, Canada, Germany and South Korea.

Israel was not included in the Edelman surveys, and the government here at that time was undergoing considerable transformations, however the dominant role of the Ministry of Health in issuing instructions to the public and the high level of compliance do indicate that there was a rise in trust in government.

A survey by the Israel Bureau of Statistics undertaken at the end of April 2020 (issued 7 May)  on civil resilience to the pandemic showed a very high level of compliance, 84.6% respondents maintained that they had complied strongly and another 7.8% somewhat complied. According to the Israeli CBS (Quality of Life indicators 2019), trust in the medical system is high, 76.4%.

Trust in government may not have risen in Israel as it did in other countries. According to the Israel Democracy Institute survey 2019, trust in government was low, 30%, down from 34% in 2018 and continuing in a downward trend. It may have stabalized or increased during the pandemic but the survey by the Israel Bureau of Statistics at the end of April 2020 found that trust in local government in Israel is still higher than trust in central government. 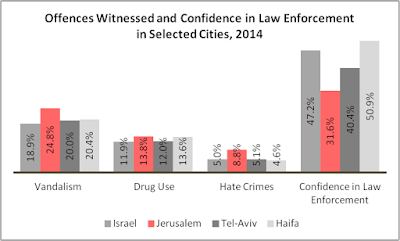 Respect Their Authority
By: Omer Yaniv
Police data show that during the year 2014, the number of events requiring a police response in the Jerusalem District totaled 225,000, a 15% rise from 2012.  How trustworthy do the public view their ...