< Previous Post Is the Corona Pandemic an opportunity to enhance trust in government?
Next Post > On the Move

According to statistics from the National Insurance Institute, at the end of April 2020, during the Coronavirus lockdown, unemployment in Jerusalem was recorded at 22.5%, as opposed to 20% in the rest of the country

According to statistics from the National Insurance Institute, at the end of April 2020, during the Coronavirus lockdown, unemployment in Jerusalem was recorded at 22.5%, as opposed to 20% in the rest of the country. The harsher blow to Jerusalem was the result of the loss of work in the tourism industry which virtually came to a standstill. In Jerusalem, 44.5% of the workers in the food and tourism sectors claimed unemployment during March and April, as compared with 36.4% in the rest of Israel. The situation was even worse for Jerusalem Arabs, among whom 55% of those employed in these sectors claimed unemployment.

It is noteworthy that the local and public administration sector did not experience serious unemployment. The policy in the public sector was not to put employees on unpaid leave, but rather to declare a “state of emergency” in which some of the employees worked from home while others took paid leave. Therefore, the rate of those claiming unemployment in this sector was very low, especially when considering that there are many workers in this sector in Jerusalem (22,853). This policy translated into a more moderate economic crisis in the city than might otherwise have been the case.

Another interesting statistic is that during March and April more working men than working women claimed unemployment, at 23.2% vs 21.7% respectively. However, when focusing on these differences and comparing the Jewish and Arab populations a different picture emerges. Among the Jews, 22.3% of women as opposed to 19.4% of men claimed unemployment, while among Arab men, 28.3% claimed unemployment, and only 18.6% of Arab women.  It appears that the Coronavirus crisis barely affected Arab women in Jerusalem, but when taking into consideration that their employment rate is very low, and that in 2019 only 17.5% of Arab women in Jerusalem were employed, we understand that the few Arab women in the workforce were seriously affected, and it will most likely be very complicated and difficult to bring them back.

< Previous Post Is the Corona Pandemic an opportunity to enhance trust in government?
Next Post > On the Move 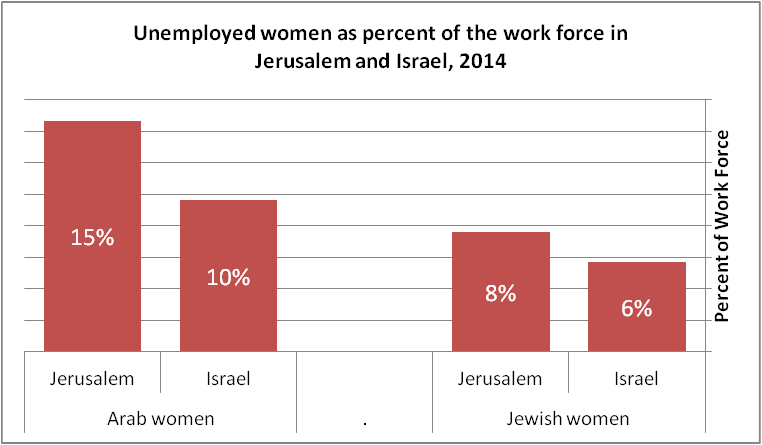 The Work Force
By: Alon Kupererd
The term “work force” describes the persons in the population, aged 15 and over, who are employed or unemployed and seeking employment.  Participation of Jews and Arabs in the Israeli work force diffe...