How much does a bus ride cost?

Main Blog How much does a bus ride cost?

How much does a bus ride cost?

We thought that a bus ride in Israel is not cheap, but the data showed otherwise

The full price of a city bus ride in most cases in Jerusalem and Israel is NIS 5.90, but most passengers do not pay this price. Some are entitled to a discount (such as children and seniors who pay half price), others charge their Rav-Kav with money (then the ride price drops to NIS 4.72), buy a monthly card (the basic price is NIS 213 per month), or use a different payment arrangement. We tried to determine whether the price of regular transit use is relatively high. It is important to note that employees usually receive a travel reimbursement.

We thought about comparing travel prices in Israel with those of other cities in the world, by currency exchange rates, or according to purchasing power parity (PPP), but we chose to compare the price of the transport alternative – a liter of fuel.

In Israel, the price of a single trip is slightly lower than the price of a liter of fuel, and at a full price of one trip, about 0.92 liters of gasoline can be purchased (gasoline prices are from globalpetrolprices.com). In other cities we have looked at, the price-to-liter ratio of gasoline is higher. In London, about 1.2 liters can be bought at a transit ride price, in Paris about 1.3, in Berlin about 2.1, and in New York one can buy about 3.8 liters of gasoline, at the (full) cost of one public transit ride. Therefore, it seems that the motivation to take public transport rather than the private car, at least from the aspect of fuel cost, is higher in Israel than in these cities. Better service of transit, together with additional costs for driving, such as traffic jams and parking, still make many residents of these cities choose public transportation.

Payment arrangements used in East Jerusalem, where 38% of Jerusalem residents reside, do not include a transfer ticket enabling free continued travel to the west of the city. For this reason, those traveling from east to west are forced to pay twice. Obviously, in these payment conditions, the account is different, and the fare as a percentage of the salary is about twice as high.

Leave the Car at Home
By: Yair Assaf-Shapira
What’s the situation in Jerusalem? The survey found that 69% of Jerusalemites who own cars and who work in Jerusalem drive to work. This leaves 31% who get to work in other ways, which is a little lo... 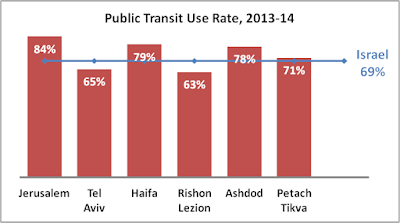 Big City Transit
By: Yair Assaf-Shapira
Looking at the quality of transit in cities can be done from a few perspectives and this time we choose to look at the customer or rider side.  Where can the highest users of public transit be found? ...