Leave the Car at Home

Leave the Car at Home

What’s the situation in Jerusalem? The survey found that 69% of Jerusalemites who own cars and who work in Jerusalem drive to work. This leaves 31% who get to work in other ways, which is a little lower than the national average.

It’s hard to get around Israel without a car – especially when taking non-routine rides, such as on rainy days or on Shabbat when there’s not much public transportation. But can car owners manage their regular routine without using their car? Well, it turns out a lot of people are already doing that. 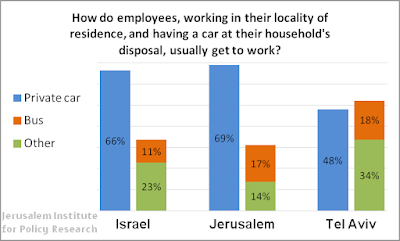 In the Central Bureau of Statistics’ Social Survey we looked at people who work in the city in which they reside (but don’t work at home). According to the survey, in 2017, 66% of people who own a car traveled to work using their private vehicle. In other words, 34% of these people used other means: 14% walked and 11% took the bus. So does this mean that one-third of car-owners are leaving their car at home? Not necessarily so, since many households have only one car and the other spouse uses the car to go to work.

What’s the situation in Jerusalem? The survey found that 69% of Jerusalemites who own cars and who work in Jerusalem drive to work. This leaves 31% who get to work in other ways, which is a little lower than the national average. Might this be because the city is so large or maybe because public transportation does not meet the needs of residents in all neighborhoods?

In Tel Aviv, the situation is a bit different. In the coastal city, only 48% of car owners used their own private vehicle to get to work. In other words, more than half (52%) of Tel Aviv residents used alternative methods to get to work: 18% took the bus, 16% rode bikes and 15% walked.

And what about the spouses? If we take a look at couples who have two cars and who both work in the city they reside in, the rate of people who drive in their own car to work rises to 82%. This number is not surprising, since needing a way to get to work is among the top reasons why families purchase a second vehicle. Nonetheless, 18% of people who have two cars are still getting to work using alternate methods: 7% take the bus and 8% walk. One way to reduce congestion on city streets and make traveling more efficient would be for more people to leave their cars at home and use alternate methods to go to work. It’s encouraging to note that a not insignificant number of people are indeed already doing this.