Can the High-Tech Sector in Jerusalem be an Economic Growth Engine for the City?

Main Blog Can the High-Tech Sector in Jerusalem be an Economic Growth Engine for the City?

Can the High-Tech Sector in Jerusalem be an Economic Growth Engine for the City?

Based on the success of the development of the bio-tech industry in the city, and since Israel is the “Startup Nation”, a decision was made to broaden existing efforts and invest resources in the entire high-tech sector.

Recent years have seen growth in the Jerusalem high-tech industry, including in the bio-tech sector in the city. Between 2013 and 2017 the number of companies increased by 52%, and according to the IVC, the Israeli High-Tech and Venture Capital Database, today there are about 500 high-tech companies in Jerusalem, of which 29% are bio-tech companies, and the number of employees is approximately 15,000. 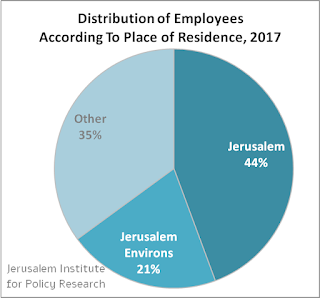 Some of the growth in the industry is related to the efforts of the Jerusalem Development Authority and the Ministry for Jerusalem Affairs in the framework of the Marom and HaYovel programs, which are designed to encourage economic growth in the city. One of the growth engines identified by The Jerusalem Institute for Policy Research is the bio-tech industry. Jerusalem has a relative advantage here, and about 10% of Israel’s bio-tech companies are located in the city, which is also home to major hospitals and one of the world’s best universities, all of which constitute fertile ground for the development of a cluster of bio-tech companies in Jerusalem.

Based on the success of the development of the bio-tech industry in the city, and since Israel is the “Startup Nation”, a decision was made to broaden existing efforts and invest resources in the entire high-tech sector. This was mainly expressed in the expansion of the provision of grants to high-tech companies in Jerusalem, and investment in the creation of a local high-tech community.

However, despite these efforts, and despite the growth of high-tech in the city, it appears that this growth hasn’t penetrated the urban economy. The incidence of poverty hasn’t changed in recent years, the rate of participation in the workforce has remained almost the same, and wide gaps remain between the salaries of workers in Jerusalem and the rest of the country. The relative share of the high-tech industry in Jerusalem has not increased in recent years and is still about six percent. In other words, the growth of the high-tech industry in the city is similar to that in the rest of the country. In addition, approximately 35% of employees in the Jerusalem high-tech industry are not residents of Jerusalem and its environs, but commute from outside the metropolis, usually from the center of the country. This figure is consistent with the claims of the Jerusalem companies that “it’s hard to find workers in Jerusalem.” And furthermore, the Arab and Haredi populations haven’t succeeded in integrating into the industry. Thus, only about five percent of those employed in the new high-tech companies in the city are Arabs.

In order for the growth of the high-tech industry to influence the urban economy, the development of quality local human capital must be pursued in the city, as well as the integration of Arabs and Haredim into the sector. This may be accomplished by exposing these populations to the high-tech industry and training them for positions for which there is a shortage of employees in both Jerusalem and the rest of the country.