It’s Off to Work We Go

Main Blog It’s Off to Work We Go

It’s Off to Work We Go

Using a specialization index, we examined employment structures and sectors strongest in Jerusalem, Tel Aviv, and Haifa. The indices reveal that each city specializes in different fields, with Jerusalem ranking highest in community and social services, Tel Aviv in banking and financial institutions, and Haifa in electricity and water supply. 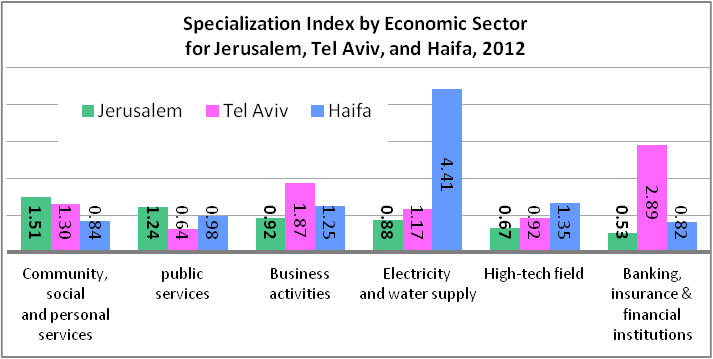 An examination of employment structures in various cities reveals that often a city will specialize in a specific industry or sector, one in which a relatively large percentage of its residents is employed. We can examine these specializations and compare cities using a specialization index.
The specialization index for a city in a specific industry or sector measures the ratio between the percentage of workers in that industry in the city (out of the city’s total number of employees) and the percentage of workers in that sector in the state as a whole. A value higher than 1 indicates relative specialization, that is, the employment weight in this sector is higher than the average for the country.
Analysis of data from the Statistical Yearbook of Jerusalem reveals that the sector in which Jerusalem had the highest specialization index for 2012 was that of community, social, and personal services – 1.51. This figure is lower than the highest value for Tel Aviv – 2.89 in banking, insurance, and financial institutions – or for Haifa – 4.41 in the water and electricity sector. It is markedly evident that in contrast to other major cities, Jerusalem does not have a prominent specialization sector and its employed population is more evenly scattered among various sectors.
An interesting question that arises in this context is whether Jerusalem, as the capital, specializes in the public service sector (which includes public administration, education, healthcare, and welfare and nursing services). The data indicate that indeed Jerusalem’s specialization index in these areas is highest among the major cities, at 1.24, yet it is not high in relation to other specializations and evidently does not constitute a distinct specialization of the city.
One branch of the public service sector is education, where Jerusalem’s specialization index is 1.35, making it the city’s second-highest specialization sector. In contrast, Tel Aviv’s specialization index for education measures 0.54, which is almost the lowest of the city’s indices. In Haifa the percentage of employees in the employment sector is identical to the national average. The variance in Jerusalem within this sector results from the city’s high percentage of schoolchildren and preschoolers.
A review of specialization indices reveals that Jerusalem is not a business or technological epicenter. In the high-tech industry, Jerusalem’s index measures 0.67. This is a low figure in itself, and it is lower than the figure for Tel Aviv – 0.92 – or Haifa, which has the highest figure among the major cities, at 1.35. In the business service and real estate sector, Jerusalem has an index of 0.92, after Haifa – 1.25 – and Tel Aviv – 1.87. Additionally, in the sector of banking, insurance, and financial institutions, Jerusalem has an index of 0.53, while the figure for Haifa is 0.82, and for Tel Aviv, where as noted it is the city’s distinct specialization sector, it is 2.89.
Source of data: 2014 Statistical Yearbook of Jerusalem
< Previous Post May I Take Your Order?
Next Post > Sha-Bus Rider