May I Take Your Order?

Main Blog May I Take Your Order?

< Previous Post Kibbutz Life: Love It but Leave It?
Next Post > It’s Off to Work We Go

May I Take Your Order?

After compiling the number of eating establishments in Tel Aviv, Jerusalem, Haifa, and Rishon LeZion, we were able to break down the extent to which kashrut is observed in these major cities. 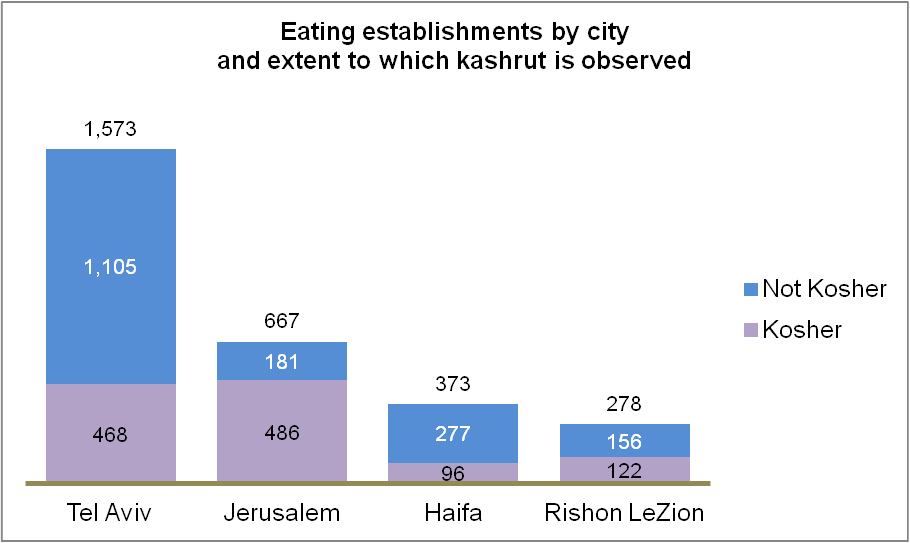 Most of the Jewish population in Israel keeps kosher. The 2009 Social Survey conducted by the Central Bureau of Statistics, which focused on religion and religiosity, found that 64% of Jewish respondents (age 20 and above) stated that they keep kosher to a large or very large extent.
Recently the issue of kashrut has surfaced as a factor that contributes to the cost of living in Israel. Restaurants and other eating establishments that seek to attract customers who keep kosher are required to meet the restrictions of kashrut established by the State of Israel, which are enforced by the Chief Rabbinate and its agents in local religious councils. In Jerusalem the issue of kashrut is often perceived as part of the discourse on the character of the city. In 2011 a communal kashrut initiative began to operate in Jerusalem (“Hashgaha Pratit” or “private supervision”), and today it has nine participating businesses.
A short internet search yields a number of websites from which we can learn about the supply side of establishments that sell food in localities throughout Israel. The database of the “Rest” website (www.rest.co.il) lists 667 eating establishments in Jerusalem. Tel Aviv has 1,573, Haifa has 373, and RishonLeZion has 278. In keeping with the image of a city where every corner hosts a café, the number of eating establishments in Tel Aviv is exceptionally high in relation to Israeli standards. Some of the reasons for this are the size of the metropolis and the culture of eating outside the home that is prevalent within the local business community and the young entertainment-seeking community.
There are differences in the extent to which kashrut is observed by eating establishments within each of the three major cities in Israel. According to the website “Rest” a total of 486 (73%) of Jerusalem’s businesses are kosher, compared with 181 (27%) that are not. Tel Aviv has 468 kosher establishments, comparable to the figure for Jerusalem, but these represent only 30% of the total; it also has 1,105 non-kosher establishments (about 70%). In Haifa a total of 96 establishments (only 26%) are kosher, and 277 (74%) are not kosher.
Classification by type of food reveals that the percentage of kosher-certified businesses that sell meat is lower than the total percentage of kosher businesses. This reflects the relative difficulty of observing kashrut for meat, as compared with kashrut in the context of milk. A total of 158 (69%) meat-serving establishments in Jerusalem are kosher (compared with 73% of the total number of eating establishments in the city), and 71 (31%) are not kosher. In Tel Aviv, 31% of meat-serving eating establishments are kosher, while in Haifa the figure is 17%, and in RishonLeZion it is 39%.
Interestingly, the percentage of kosher businesses that offer delivery is higher than the overall percentage of kosher businesses. In Jerusalem 185 (85%) of the businesses that offer delivery are kosher, in Tel Aviv 42% are kosher, and in Haifa the figure is 33%. This higher percentage can be explained by looking at the types of food offered for delivery – pizza, hamburgers, and so on – which are perceived as more populist and are quickly prepared. Such business places cater to a wider target audience and rely on relatively lower profits per unit.
Sources of data:
Rest website (Zap Group): http://www.rest.co.il
< Previous Post Kibbutz Life: Love It but Leave It?
Next Post > It’s Off to Work We Go

nice blog good thinking success consists of going from failure to failure without loss of enthusiasm.