The mixing of allocated uses of land (hereinafter, “mixed use”) is an accepted urban-planning practice today. This approach allows a combination of residential and other uses, such as commercial, educational, cultural, and the like, within a specified planning zone (a building or street). The mixed-use approach stands in contrast to the separate-use approach, which requires separation of zones according to allocated uses. Jane Jacobs, considered one of the most prominent advocates of the mixed-use approach, believed that mixed use is a key factor in urban renewal and the creation of successful urban areas.

One can examine the mixed uses within an area by analyzing the data on residential and non-residential floor space. Areas with allocated uses approaching 50% residential and 50% non-residential are regarded as having the optimal mixed use. An analysis of municipal tax (residential and non-residential) allocations for 2010 makes it possible to identify the extent of mixed uses within all areas of Jerusalem. These areas were divided into a number of principal groups representing the extent of mixed use. The first group comprises areas in which over 80% of the built-up land is residential, with commercial-use land concentrated in one place. This group includes new residential neighborhoods such as PisgatZe’ev, Ramat Shlomo, and Ramot, as well as the Arab neighborhoods of Shuafat and Issawiyya. The second group comprises areas with 60%-79% of the land allocated for residential use and includes the older neighborhoods that contain Jerusalem’s central commercial streets, such as the German Colony, Mea She’arim, and BeitHaKerem.

The third group (40%-59%) comprises residential areas with major commercial and business centers, such as the southern part of the French Hill neighborhood, parts of the Old City, and parts of BayitVagan. The fourth group (10%-39%) covers those areas where residential use is not the principal characteristic of the area, such as parts of the city center and parts of Giv’atShaul. The fifth group (0%-9%) comprises Jerusalem’s main commercial and business areas, such as HarHotzvim, the government compound, and the Malkha shopping mall. 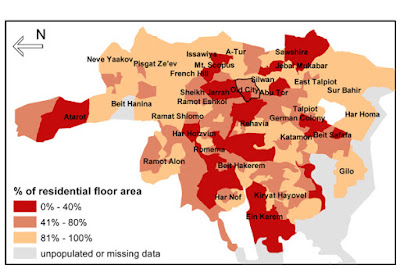