On and off the beaten track

Main Blog On and off the beaten track

On and off the beaten track

How do Israelis spend their summer months?  How do summer plans differ depending on if you’re secular or religious?  About two-thirds (67%) of persons aged 20+ in Israel, or 3.6 million people, went on vacation either abroad or within Israel during the past 12 months. 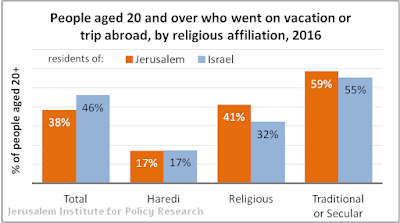 The summer holidays are over, the kids have returned to school, and the high holy days are upon us. Anyone who did not vacation this summer might want to do so now.

According to the 2016 Social Survey of the Central Bureau of Statistics, about two-thirds (67%) of persons aged 20+ in Israel, or 3.6 million people, went on vacation either abroad or within Israel during the past 12 months. Twenty-four percent reported that only holidayed in Israel, 12% traveled abroad, and 31% reported that they took vacations both in Israel and abroad.

Jerusalem residents vacation less than the average Israeli. Among Jerusalem residents, 40% went on vacation in Israel, compared with 55% among all residents of Israel. Among Jerusalemites, 30% went abroad, compared with 43% of Israeli residents. Presumably these figures stem from the low socio-economic status (on average) of the city’s residents, but they might also reflect a cultural aspect of the city’s population, a large portion of whom cannot afford or do not wish to vacation.

Contrary to expectations, among the three main Jewish population groups of Jerusalem, the percentage of vacationers is evidently identical to or higher than the figure for Israel in general. In the secular and loosely observant population, 59% went on vacation abroad, compared with 55% among the same group in Israel in general. As for vacationing in Israel, the percentages were identical, at 64%.

Among Israel’s religious population, 41% of Jerusalemites vacationed abroad, compared with 32% for Israel in general. A comparable difference between Jerusalem and Israel was recorded for religious people vacationing within Israel (64% vs. 58%).