Between Man and Fellow Man

Between Man and Fellow Man

How can trust be measured amongst Israelis?  How does socio-economic status affect trustworthiness?  Can people be trusted? 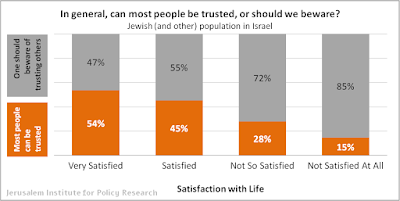 Sometimes there is an assumption that the wealthier people are, the less they trust others, but it may be that the reality is just the opposite – the survey reveals a connection, but it found that it was actually people of a higher socio-economic status who tended to have trust in others. Among those with higher incomes (NIS 4,001 and above, per capita, for each member of the household), about half of the respondents (51%) stated that people can be trusted, as opposed to 40% among medium income earners (NIS 2,001 to NIS 4,000 per capita), and only a quarter (25%) of low income earners. When examining non-economic variables as well, the findings were similar. Thus a much higher level of people who have an academic degree, as compared to those who don’t have higher education, tend to trust others (61% as opposed to 36%).

Does religious identity influence the response? Among Jews, it is clear that higher levels of religious people (54%) and secular people (52%) feel that others can be trusted, as opposed to Haredim (40%) and traditional Jews (36% to 41%).

And what about Tel Aviv?  Is it “dog eat dog” in that city? Not necessarily – most (54% among the Jews) residents of Tel Aviv actually do tend to trust others, as opposed to 46% of (Jewish) Jerusalemites. In fact, among the big cities, Tel Aviv is the city where the highest percentage of people who tend to trust others was recorded.

It seems that satisfaction with life is also related to the tendency to trust others. Among Jews, a majority (54%) of people who stated that they are very satisfied with their lives said that most people can be trusted. The more satisfaction with life decreases, so does the tendency to trust others decrease, with only 15% of people who are not satisfied with their lives at all, thinking that you can trust most people.

And finally – it is interesting to see that age also influences the results. Thirty to forty-nine year-olds trust others at higher levels (42%-46%) than other age groups do (37%-41%).

To our readers – thank you for your ongoing trust in us, we apologize if we have offended you in any way, and wish you well over the fast.