How can Israel fix its road congestion problem?  How are the roads different within Israel?  Israel’s roads are the most congested among all OECD countries. 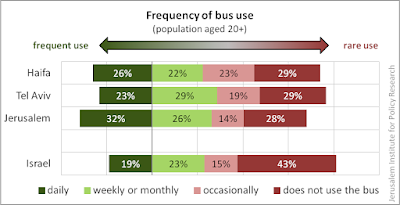 Israel’s roads are the most congested among all OECD countries. Residents of and visitors to Israel’s major cities are well aware of this congestion: every morning long lines of cars grace each junction and interchange in and around the city. Experts in the field have increasingly promoted public transportation as the best solution to the city’s traffic problems, and in recent years the government has invested heavily in this area. The question is whether the residents of Israel’s cities feel the impact of these investments.

The findings of the Central Bureau of Statistics’ Social Survey (average for 2014-15) indicate that 66% of Israel’s residents aged 20 and above commute to work primarily by private vehicle, motorcycle, or carpool. For about 20%, the main mode of transportation is a train or bus, and 10% ride a bicycle or walk to work (the remainder work from home or commute by unknown means).

There are interesting differences between Jerusalem and Tel Aviv in this regard. While the proportion of those who commute by vehicle or carpool is comparable in both cities (50% and 51%, respectively), the use of public transportation is much more prevalent in Jerusalem: 33% of Jerusalem’s residents rode the train or a bus to work, compared with only 26% in Tel Aviv. Biking and walking are more prevalent in Tel Aviv, where 17% of the residents commute to work by bicycle or foot.

The differences stem, evidently, from Tel Aviv’s more manageable topography and convenient concentration of workplaces. Jerusalem, by contrast, is hilly and spread out, and the distance between its residential and business zones might explain its residents’ preference for public transportation. The low rate of car ownership among the Haredi population is also, presumably, a contributing factor.

The use of public transportation in Jerusalem is in fact the highest among Israel’s large cities. Among the other major cities, the rate varies from 22% (in Be’er Sheva) to 29% (in Netanya). Jerusalem is the only city where the rate exceeds 30%.

The frequency of use of public transportation is also higher in Jerusalem. In 2015, about 19% of Israel’s residents reported that they ride a bus on a daily basis; that is, buses were their main means of transport. This rate is higher in the major cities than in the suburban and rural areas: in Haifa it stood at 26%, in Rishon LeZion at 25%, in Tel Aviv at 23%, and in Jerusalem the rate was 32%.