Main Blog Back to School 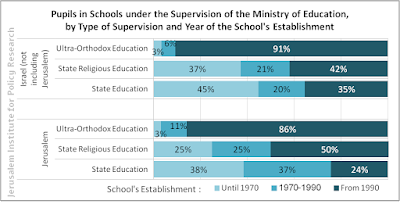 After the long summer vacation, followed by the period of the High Holidays, more than 2,272,000 pupils finally return to school and to their regular routines.

The Ministry of Education recently published a list of all the educational institutions under its supervision (the list is updated to 2015). An examination of the years when the Hebrew education institutions were founded, and the number of students who attended them, reveals some interesting points.

The oldest schools are the Alliance School in Haifa, which according to the records was founded in 1860, and the schools belonging to Beit Yisrael (both general studies and religious studies schools) in Tel Aviv, established in 1870. The list shows that the total number of schools founded before the establishment of the state was 84, and they were attended by 64,360 pupils. At the other end of the spectrum, each year a few dozen new schools are opened. For example, in 2014, 112 schools were established, and the previous year the number was 118.

In recent decades, a trend can be identified in the increasing number of Ultra-Orthodox educational institutions being opened. The need to open these institutions is the result of the high natural increase in the population among the Ultra-Orthodox sector, where more children are born every year. The percentage of Ultra-Orthodox schools founded since 1990, from the total number of schools in the Ultra-Orthodox stream, stands at 91% in Israel (not including Jerusalem), and 86% in Jerusalem. During these years there was a significant increase in the schools in the independent school systems as well as state recognition of these schools, and these changes have left their mark on the education system.