What are the demographics of Jerusalem?  How is the Haredi population a factor in that statistics?  Personal choices about where to live made at this time of life have significant influence on the character of the city and its neighborhoods. 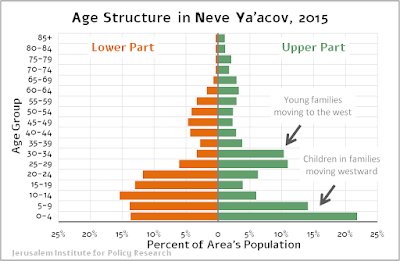 In every discussion about the demographic future of Jerusalem and its various neighborhoods, the residential patterns of young people (20- to 34-year-olds) within the city must be taken into consideration. At these ages, following their army service, most people are setting out independently, studying at academic institutions, seeking employment, or marrying and starting families. Personal choices about where to live that are made at this time of life have significant influence on the character of the city and its neighborhoods.

The following is a 2011-2015 analysis of the Jerusalem neighborhoods where young people (aged 20-34) constitute more than 40% of the adult (over 20-year-old) population.

The most prominent finding is that the haredi neighborhoods have the highest percentages of young people (aged 20-34), with their percentages reaching as high as 60% of the adults in the Bayit VeGan neighborhood. In many Arab neighborhoods as well, young people comprise up to 51% of the adult population, one example being New Anata (Ras Shehada). Both these population groups are characterized by high fertility rates (3.23 among the Arabs, and 6.9 among the haredi population) and therefore their populations are younger relative to the general population in Israel.

A deeper analysis teaches us about patterns of “haredization” in certain Jerusalem neighborhoods and about the neighborhoods preferred by secular and religious young people.

In upper (western) Neve Ya’acov there is a continuous increase in the number of young people – from 3,840 in 2011 to 4,450 in 2015 – a 15% increase, among the residents aged 20 to 34. This is an increase from 45.5% in 2011, to 51% in 2015. The story behind the figures is that in recent years a trend of “haredization” has been observed, moving from the lower (eastern) part of the neighborhood (that has been haredi since its inception) to the upper part. When considering the young families (defined as having children aged 0 to 9, and parents aged 25 to 39), the “haredization” in Neve Ya’acov  grants the area the highest percentage of young families among Jerusalem neighborhoods, where they comprise 62% of the residents in the upper part of the neighborhood.

When studying the concentrations of people aged 20 to 34, it emerges that the areas they prefer are the various parts of Nahlaot and the center of the city, in the triangle formed by the streets Jaffa, King George, and Agron, where they comprise between 41 and 53% of the residents. These areas experienced an increase of 14% in the total number of young people who reside in them, between 2011 and 2015, when the numbers grew from 3,550 to 4,050.

In Rehavia, young people constitute 43% of the adult population. The neighborhood is popular among students, and also among young haredi families from North America. The highest growth rate was recorded in the northern part of Rehavia adjacent to the Sha’arei Hesed neighborhood. For young families, Nahlaot leads among the non-haredi neighborhoods, where young families number about 51% of the adult residents. However, the percentage of children in the neighborhood is low relative to other neighborhoods such as Talpiot, Gilo, Pisgat Ze’ev, Ir Ganim and Nayot. The recorded high percentage is actually comprised of a very high concentration of 25 to 29-year-olds who don’t have children.

The data clearly reveals that Nahlaot and the city center are the preferred temporary neighborhoods for young people who have not chosen to start a family, as compared to the concentrations of young haredi people who are starting families in the neighborhoods they choose to settle in.