Individuals tend to relocate in response to pivotal life-events, whether the birth of a child or once a child has reached school age. Many of those who leave Jerusalem relocate to localities in the surrounding area, which can be grouped into different categorizes by the particular demographic populations they draw.

Beit Shemesh, another major destination for ex-Jerusalemites, draws a more mixed population that includes Ultra-Orthodox groups as well as others. Adults between the ages of 30 and 64 accounted for 23% of incomers to Beit Shemesh, and young adults between the ages 15-29 account for another 35%. Like other major destinations for the Ultra-Orthodox population, the percentage of children entering the city approximated 40%. 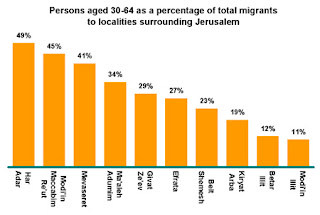