The months of July and August mean summer vacation from schools and nurseries, half-empty workplaces, and a holiday feeling in the air. This raises the interesting question of where – within Israel – Israelis choose to spend their summer holidays. During July and August of 2010, Israel’s hospitality services registered approximately 5,860,000 overnight stays (Israelis and tourists): 84% in tourist hotels, 12% in rural accommodation, and 4% in youth hostels. The data further indicates that during this time of the year, there were significantly more Israelis than tourists among hotel guests. Of a total 1,575,500 hotel guests, approximately 1,116,700 are Israeli (71%), compared to only 458,700 tourists (29%).

Where do Israelis choose to spend their vacation? Eilat clearly stands out as the strongest preference. During July and August of 2010, hotels in Eilat accommodated 461,500 Israeli guests, representing 41% of the total number of hotel guests within the country. Jerusalem hotels accommodated 92,100 Israelis (8% of the total number of hotel guests in Israel). During July and August, Jerusalem in fact recorded the largest number of Israeli visitors in comparison with the rest of the year, representing 26% of all Israeli tourist hotel guests within the city during 2010. Other popular destinations included the Dead Sea hotels (12%), Tiberias (10%), and Tel Aviv (4%).

Jerusalem ranks first among the preferred destinations of tourists, and this preference holds during the summer months as well. Despite the large number of Israeli visitors to Jerusalem during July and August, Israelis represented only 39% of visitors to the city, whereas foreign tourists accounted for 61% of Jerusalem’s visitors during this period. 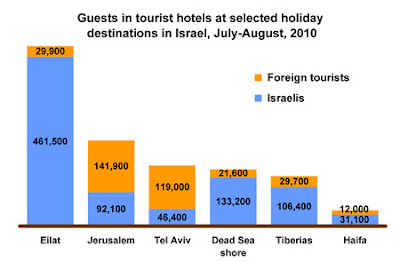