< Previous Post The Arab Population in Jerusalem, and in the PA’s Jerusalem District
Next Post > Impact Factors

The Central Bureau of Statistics recently released data on the socio-economic characterization of neighborhoods in cities. The areas characterized by an Arab majority are in clusters 1-3, the regions in which a large Ultra-Orthodox population lives are in clusters 1-4, and among the general population, there is a greater dispersion between clusters, with a dominance of clusters 5-8.

The Central Bureau of Statistics (CBS) recently released data on the socio-economic characterization of neighborhoods in cities. The CBS usually publishes such data only after a census, but since the data is based on administrative sources such as the National Insurance and the Ministry of Transport, the index can also be calculated without a full census. The socio-economic index is a weighting of 14 variables that measure the social and economic level in four areas – demographics, education, standard of living, and employment. The weighting creates a metric by which neighborhoods or localities are divided into clusters, with 1 being the lowest cluster, and 10 being the highest.

As a city, Jerusalem is located in cluster 2, like many of the Arab localities (such as Kalanswa and Arabe) and the ultra-Orthodox cities (such as Bnei Brak and Elad). Jerusalem is very diverse , and all clusters are represented in it, except for cluster 10 (in this prestigious cluster there are only 7 neighborhoods in Israel , Which together hold 19,000 residents, most of them in Tel Aviv and Ramat Hasharon, and another 6,000 residents in three localities).

Most of the city’s residents lived in 2015 (the year to which the data refers) in the lower clusters, and sixty one percent of Jerusalemites lived in neighborhoods characterized by clusters 1-2. However, if one examines the Arab, ultra-Orthodox, and general areas separately, a large difference is found in the distribution of the three populations.
All areas characterized by an Arab majority are in clusters 1-3, with the majority of the population in these regions (76%) living in cluster 1. The regions in which a large Ultra-Orthodox population lives are all in clusters 1-4, while in this population as well, the majority (53%) Live in cluster 1. Among the general population (non-ultra-Orthodox Jewish population), there is a greater dispersion between clusters, with a dominance of clusters 5-8, and with the cluster holding the most population being cluster five (21% of the population). It is important to note that many of these populations live in non-typical neighborhoods.

In areas and neighborhoods of clusters 8-9, corresponding to localities such as Mevaseret Zion, Herzliya, Givatayim and Har Adar, lived 48,000 residents of Jerusalem.

< Previous Post The Arab Population in Jerusalem, and in the PA’s Jerusalem District
Next Post > Impact Factors 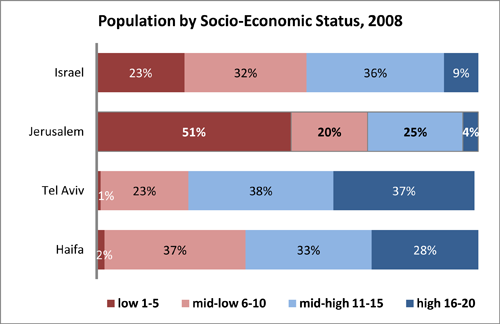 Socio-Economic Status
By: Yair Assaf-Shapira
The socio-economic index is a complex indicator, made of 16 different variables, covering the subjects of demography; education; employment; and standard of living. These 16 variables were combined in...