The Arab Population in Jerusalem, and in the PA's Jerusalem District

Main Blog The Arab Population in Jerusalem, and in the PA’s Jerusalem District

The Arab Population in Jerusalem, and in the PA’s Jerusalem District

The age structure of the Arab population in Jerusalem resembles that of the PA Jerusalem District in the 20 to 29 age group, while in recent years a different trend is evident. The difference may be attributed to the erection of the security fence, which separates between the two.

According to data from the Israel Central Bureau of Statistics (CBS), at the end of 2017 there were approximately 341,500 Arabs residing in Jerusalem. According to the Palestinian Central Bureau of Statistics (PCBS), in 2017 there were 133,900 residents living in the Jerusalem District of the Palestinian Authority (PA), which extends from Qatana (near Har Adar) in the west, to the Dead Sea in the east. This number does not include those living in the city of Jerusalem, or the residents in the Israeli localities (settlements). We attempted to examine these two groups, and the Arabs in Israel as a whole, by looking at the age structure (pyramid), which describes the population according to the percentage each age group represents, and enables the study of past, present, and future trends.

The age structure of the Arab population in Jerusalem is relatively young, and is characterized by two main features. First, there has been a very low increase from year to year in the number of children in the four youngest age groups (ages 0 to 19), and in the youngest age group (ages 0 to 4) the number of children is actually lower than the number of those in the age group above. This is not a common situation, especially following 15 years during which each age group was significantly larger than the group above it.

The second feature is a large difference between cohorts among the 15 to 29 age group, and mainly in the 20 to 29 age group. The years during which these people were born – the late 1980s and early 1990s, were the years of the First Intifada, which were characterized by an increase in the number of children born.

To a great extent, the age structure of the Arab population in Israel is reminiscent of that of the Arab population in Jerusalem, and the two features mentioned above are also evident among the latter. Among the population of the PA Jerusalem District, there was substantial growth in the number of people in the 20 to 29 age group, who were born during the First Intifada, while in recent years there has been a very moderate decrease in the numbers of children. It may be posited that one of the reasons for a similar trend about 25 years ago, and a different trend in recent years, is the erection of the security fence, which separates between the city of Jerusalem and the Jerusalem District of the PA. 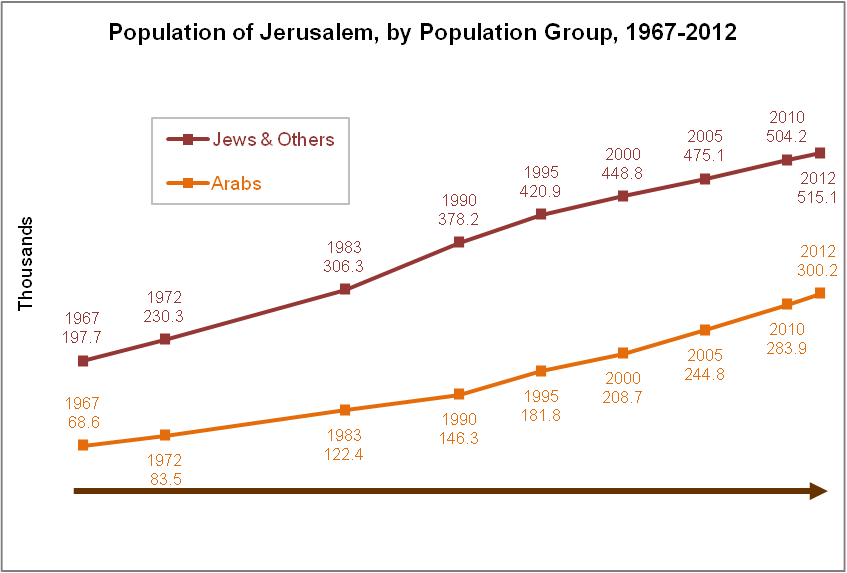