The True Stats of Doing Business

The True Stats of Doing Business

The business sector is constantly in flux – given the large numbers of openings and closings.  How can statistics measure a business?  At what rate do businesses increase? 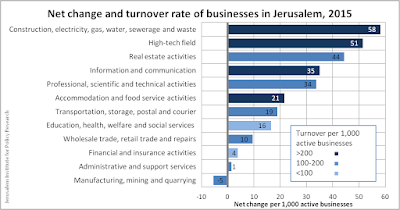 Indeed, the data on business registrations, as provided by the Central Bureau of Statistics and presented in the 2017 Statistical Yearbook on Jerusalem (forthcoming), indicate that in all economic sectors, with the sole exception of the manufacturing, mining, and quarrying sector, there has been a gradual increase in the number of active businesses during 2015. For example, during this year Jerusalem saw the opening of 242 new businesses in the real estate sector while 137 were shut down, indicating a positive net change of 105 businesses for this sector. This is smaller than the figure for Tel Aviv-Yafo, which saw an increase of 212 businesses in the real estate sector during the same year. In Haifa there were 146 business openings and 88 closings, yielding a net change of 58 new businesses – well below the figures for Jerusalem or Tel Aviv.

The important question, however, is whether this net change is a true reflection of activity trends in the business sector. Not necessarily, as it turns out, given that the absolute numbers do not accurately represent the proportionate change in the number of businesses in a city, and given that the economy of a city varies with the size of the city. As such, any comparison across cities requires an index of measurement that neutralizes variance in the number of active businesses per city. So let us compare business activity across cities using ratios per 1,000 businesses.

When we examine the above data using this method, we find that Jerusalem saw an increase of 44 businesses for every 1,000 active businesses, while Tel Aviv had an increase of 33 businesses per 1,000. In Haifa the proportion was 40 businesses per 1,000. Thus we see that even though Tel Aviv saw the greatest increase in this sector in absolute numbers, its rate of growth was the lowest among the three major cities, including Haifa, which had the lowest figure in absolute numbers.

In addition to the rate of growth, we can also examine stability. To see which sectors maintained relative stability and which underwent high turnover, let us calculate the rate of change among businesses (sum of business openings and closings) per 1,000 active businesses.

When we compare across sectors, we find that among the three major cities and Israel as a whole, the sector with the highest rate of business openings and closings was that of accommodation services and restaurants (287 openings and closings per 1,000 active businesses in Jerusalem, 260 in Tel Aviv, and 315 in Haifa).

It should be noted that those sectors that showed high rates of business openings and closings also had relatively high rates of growth in terms of the number of businesses per 1,000 active businesses: in Jerusalem the hi-tech industry ranked second and the information and communications sector ranked fourth; in Tel Aviv the hi-tech industry ranked first and the information and communications sector ranked second.