Employment Integration and the Jerusalem Intifada

Employment Integration and the Jerusalem Intifada 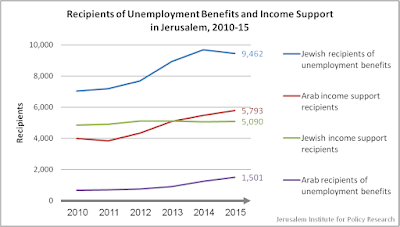 Since the end of the second intifada and construction of the separation fence, the economic and employment integration of Jerusalem’s Palestinian residents within West Jerusalem has been on the increase. The demographic growth of the city’s Palestinian population, on the one hand, and the economic crisis in East Jerusalem caused by the separation fence and consequent disconnection from the Palestinian economy, on the other, resulted in the integration of this population group into the Israeli labor market on a scale and scope unprecedented since 1967. Newly available data of the National Insurance Institute (social security), as processed by the Jerusalem Institute for Policy Research in relation to the composition and characteristics of persons employed in Jerusalem during 2006-2015, reveal that in 2015 the increase in number of Arab workers was halted, for the first time ever, and even reversed slightly.
As of 2015 employed residents of Jerusalem numbered 278,403. The relative proportion of employed Arabs within the city’s labor force grew steadily between 2006 and 2015, from 22% in 2006 to 28% in 2015. During this period the number of employed Arabs registered with the East Jerusalem branch of the National Insurance Institute rose from 45,730 to 74,204 – an increase of 62%. In 2015 this increase was halted and the total even declined by 110 employees.

Current data on recipients of unemployment benefits and income support can, to a certain extent, help explain why the city’s Arab labor force stopped increasing. According to National Insurance Institute data, the number of recipients of unemployment benefits among East Jerusalem Arabs rose steadily from 352 in 2008 to 1,501 in 2015 – an increase of 426% in seven years. The main increase took place during 2013-2015. In addition, the number of income support recipients from East Jerusalem also jumped, nearly doubling between 2011 and 2015, from 3,853 to 5,793 – about 700 more than the number of Jewish income support recipients in the city for the same year. These figures presumably reflect the large number of Arab workers who were excluded from the employment cycle in recent years. Their exclusion can probably be explained in terms of the economic crisis that befell Jerusalem’s private employment sector following the events of the Jerusalem intifada, as well as instances of dismissal or refusal to employ Arab workers in West Jerusalem during this period. At the same time, the increase in recipients of unemployment benefits and income support could also indicate an increase in awareness and capability within this population group when it comes to implementing their social rights. In other words, their economic integration and what has recently been termed their “Israelization” actually enable Palestinian residents of East Jerusalem to claim their social rights under conditions of economic crisis or dismissal from work, which in turn result from an intensification of the national conflict in the city.