Most of the education sectors in Israel are growing in numbers, but the growth rate is different for every sector, and also changes over time.

In the current school year, 2020/21, 2.4 million children are studying in the Israeli education system, according to data from the “Broad View” system of the Ministry of Education (note that the current year data are not complete and are updated along the year). If only school children (excluding kindergartens) are included, we are left with about 1.87 million children.

A decade ago, in 2010, the number of children in schools in Israel was 1.51 million, which means that the number has since increased by 24%, or an average of 2% per year.

The education system is divided into sectors, and not every sector grows at the same rate. Since 2010, the fastest growing educational sector has been Ultra-orthodox education, which is currently the second largest sector (after state education), and currently has 359.2 thousand students in Israel. Haredi education has been growing since 2010 at an average rate of 3.6% per year.

It is interesting that in the previous decade (2000-2010), Ultra-orthodox education did not have the highest growth, since Bedouin education then grew at an average rate of 5.7% per year, compared to 4.7% in the ultra-Orthodox sector.

A low percentage of growth was recorded in education in the Arab and Druze sectors. Both had a sharp decline in the growth rate from the previous decade, and in the Druze sector there was even a decline in the number of students. Between the two decades, the previous and the present, the only two sectors in which the growth rate was on the rise, were the state and the state-religious sector. 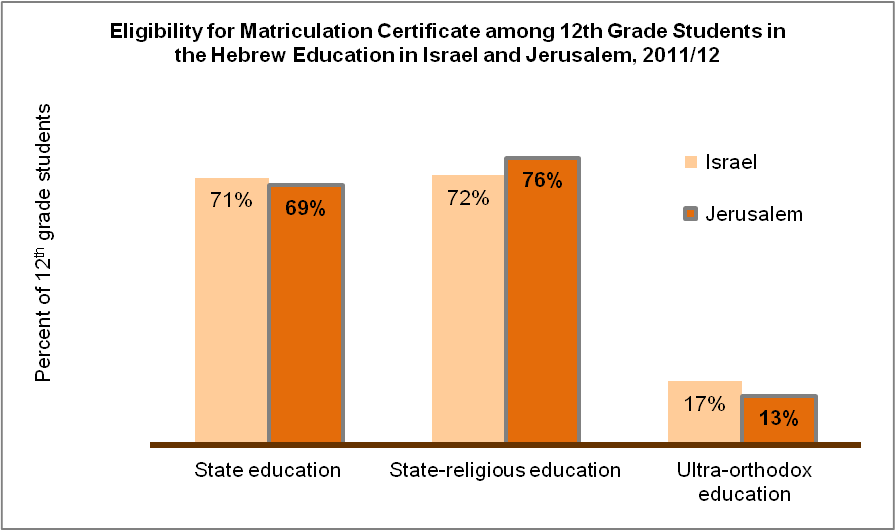 High School Matriculation: The Key Is to Understand the Whole
By: Yoad Shahar
The percentage of students eligible for matriculation certificates from among 12th grade high school students enrolled in the state and state-religious education systems has in fact been rising in rec...