We should be healthy!

Main Blog We should be healthy!

We should be healthy!

There is evidence regarding health amongst the different sectors in Jerusalem.  Haredi communities, overall, have better health than the non-Haredim.  It is interesting to compare the results for the different populations in Israel and in Jerusalem. 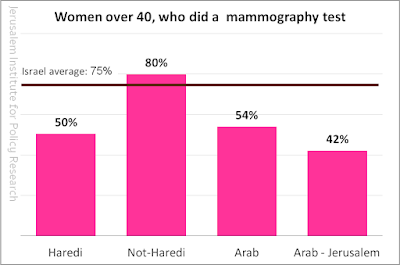 The recently-released Central Bureau of Statistics Social Survey for 2017 includes questions about issues related to health. It is interesting to compare the results for the different populations in Israel and in Jerusalem. The topic of health is especially intriguing with respect to the Haredi population, since it is difficult to evaluate the scope of its members’ utilization of health services, specifically preventive services.

With respect to a colonoscopy – a diagnostic test for colon cancer – according to the survey only 21% of the Haredi population aged 40 and older had ever had the test, as opposed to 43% of the non-Haredi population. Among the Arabs in Israel, 27% have undergone the test. In Jerusalem, only 18% of the Haredim, 53% of the non-Haredim, and 19% of the Arabs have had the test.

So is health a matter of diagnosis or of faith? According to the survey, each Jewish population group has its own answer. Among the Arab population, it is compelling to note the prevailing situation in Jerusalem: When it comes to health, as is the case with respect to other quality-of-life parameters, its situation is less good than that of all the Arabs in Israel.
We should be healthy!