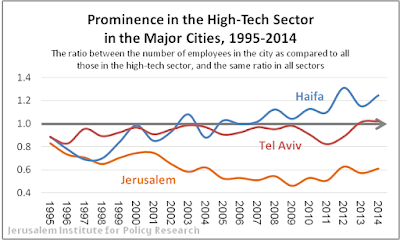 In 1995, there were 9,800 people employed in the high-tech sector in Jerusalem, according to the publication “The Development of the High-Tech Sector in Israel, 1995-2014” published recently by the Central Bureau of Statistics (CBS). In the same year, in the entire country there were 115,900 people working in the sector, so that Jerusalem high-tech employees comprised 8.4% of the total. Is that many or few? The number of workers in all sectors in Jerusalem, as compared to all workers in Israel, was higher (10%), so it may be said that Jerusalem is more prominent in other fields of employment.

In the employment sector, and in high-tech in particular, changes are constantly occurring. Even since 2014, which is the cutoff for the data in the recent CBS publication, things have continued to change. In Jerusalem, the large Israeli technology company Mobileye was acquired by Intel a few months ago, and the new complex that was subsequently approved is expected to employ thousands of people. In addition, it was announced that Rafael, a weapons development company, will establish a development center in Jerusalem which is expected to employ several hundred workers. It is possible that these new centers will change the current trend. A detailed examination reveals that following a continuous decline between 1995 and 2009, from 2010 the decline was halted, and a rise in the prominence of the high-tech sector in the city began.