A Secondhand Car from Jerusalem?

A Secondhand Car from Jerusalem? 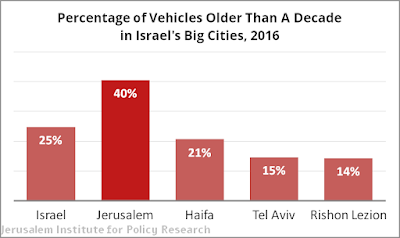 According to data from the Israel Vehicle Importers Association, the year 2016 saw a record high in the delivery of vehicles in Israel. The purchase of new vehicles contributes to the replenishing of the stock of vehicles that travel on Israel’s roads: new vehicles equipped with sophisticated safety systems, which emit lower levels of pollution, and are quieter and more economical. However, as long as the purchase of new vehicles is not balanced out by old vehicles being taken off the roads, this isn’t necessarily good news. The general rise in the number of vehicles leads to increased congestion on the roads, which in turn leads to an increase in the transportation burden and emissions of pollutants, and further irritates the already frayed nerves of the Israeli driver.

In light of these implications, it is interesting to see where car inventory is renewed and where it lags behind with aging vehicles. With respect to the big cities, the answer seems clear – according to Israel’s Central Bureau of Statistics, in 2016, about 40% of the cars whose owners live in Jerusalem were a decade old or older. That is in comparison with 25% of the vehicles in the entire country, 21% in Haifa, 15% in Tel Aviv, and 14% in Rishon Lezion.

We tried to find various explanations for this phenomenon. Maybe it’s the leasing companies that are registered in the center of the country and work tirelessly to renew their inventory; or it might be the result of the generous credit loans and the low interest rates that the banks offered the buyers (the ones that Avi Bar-Eli and Oren Dori wrote about in January 2017 in an article in TheMarker). It may be that unlike the benefits granted in personal contracts from private companies in the central part of the country that encourage the purchase of a new car, the tax benefits in the public sector in Jerusalem and the weak buying power of the residents, encourage people to hold onto their old cars.

Or maybe it’s just the Jerusalem nostalgia, the difficulty to disconnect from the past and to embrace change – as embodied in the renowned pun and prohibition against any change to customary Orthodox practice, that “new is forbidden by the Torah,” written by the Chatam Sofer in the 1800s – or the innate modesty, and the god-fearing nature of Jerusalemites, that cause its residents to cling to a 1989 Subaru. Perhaps.