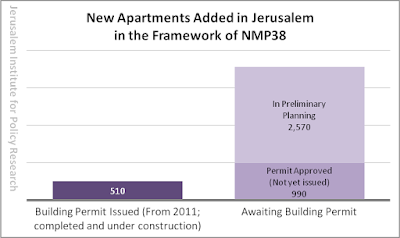 National Masterplan 38 (NMP38, or TAMA38) is a national plan with a double purpose – to reinforce old buildings and ensure their earthquake preparedness; and to contribute to urban renewal, by adding new apartments in built-up areas. The NMP38 allows for the possibility of constructing additional apartments, the sale of which finances the reinforcement of the building, the expansion of the existing apartments, and often the addition of an elevator and other improvements. When you visit Jerusalem neighborhoods, you may see projects being executed in the framework of NMP38, but not many of them. For instance, on the street where I live there is one completed NMP38 project, and on my way to the Jerusalem Institute I pass by two additional projects. Is the NMP38 in Jerusalem proceeding at a relatively slow rate? Not necessarily.

Extensive planning processes take long years to complete, and not only due to bureaucratic procedures and processes. In the case of NMP38, and especially in Jerusalem, it takes time until both home-owners and entrepreneurs are convinced that they are embarking on a worthwhile investment. Are the tenants and entrepreneurs convinced? What does the future hold for NMP38?

The Jerusalem Municipality publicizes urban renewal projects, among them NMP38 projects, on the municipal Geographic Information System (GIS) website. Among all the projects that received building permits – in other words, projects where construction has already begun, will begin soon, or has been completed – 75 projects were identified across the city, comprising the expansion of 720 existing apartments, which includes the addition of 510 apartments, in the framework of NMP38.

These projects were approved starting from the middle of 2011, which means they have been in progress for the past 6.3 years. Hence, every year, on average, about 81 apartments have been added via NMP38. And it is very likely that the pace will accelerate, for today there are 410 projects, at various stages of planning (they have yet to receive building permits), which include the addition of 3,550 new apartments. It turns out that on the street where I live five additional projects are planned, and that on my way to work I pass by another eight projects that are in different stages of planning.

NMP38 has one track for the reinforcement of existing buildings, and another track for demolishing and re-building. It is interesting to learn that about 51% of the additional apartments in the new projects (those in the initial planning stages) are now on the demolish-and-re-build track, as opposed to 30% of the apartments that have received building permits over the years. It appears that NMP38 in general, and the demolish-and-rebuild track in particular, have won over the tenants and the entrepreneurs.

The highest prevalence of the NMP38 project is in the Rehavia neighborhood (33 projects of which 16 are in the initial planning stages). This fact provides food for thought, for it is in this neighborhood, where a detailed and up-to-date Master Plan exists, where the behavior of the public clearly demonstrates a preference is for NMP38, which by its nature does not include comprehensive neighborhood thinking, but focuses solely on the individual building.

Dear
Is there a possibility to have access to full list of projects awaiting building permit for TAMA 38 in Jerusalem ?
Brgds