Education is related to the success of one’s employment.  Is there an imbalance between Arabs and Jews when it comes to education?  Among both Jews and Arabs, the influence of education on employment is clearly evident. 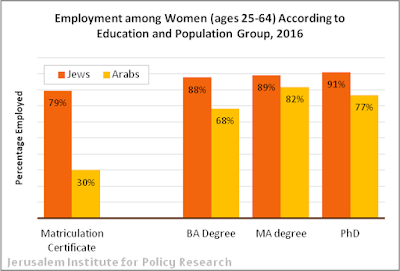 While the rates of employment in Jerusalem are lower than those in the rest of the country, the trends are similar. Among Arabs, the rate of those at the predominant working ages who are employed is 49%, whereas the rate among Arab men is 80%, with the rate among Arab men who hold a BA reaching 86%, while 83% of those who have a matriculation certificate are employed. Among Arab women in Jerusalem the rate of employment is only 20% in general, 12% for those who have a matriculation certificate, and 43% for those who have a BA.

The Council for Higher Education in Israel claims that the market for higher education has reached its limit with respect to the number of students enrolled. In an attempt to assess the extent of enrollment among the different populations in institutions for higher learning, we compared three age cohorts (ages 20 to 22) with the number of students studying for a first degree at local universities and colleges. We found that about 60% of non-Ultra-Orthodox Jews ages 20 to 22 are studying at institutions of higher learning, as compared to 23% of Arabs at the same ages.

It appears that the Arabs lag behind the Jews when it comes to embracing higher education. The percentage of Arab women who hold academic positions is high (35%) relative to those in other positions, and similar to that of Jewish women (33%). In other words, education is a key to employment for Arab women, so that encouraging Arab women to continue their studies at institutions of higher education may yield high returns with respect to their rate of employment.