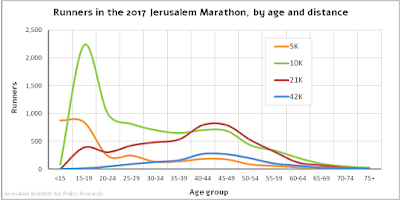 On Friday, March 17, I awoke to a cool, quiet morning that felt like a holiday. There was almost no sound of cars, because many roads were closed for the Jerusalem Marathon. It’s a complicated morning for shopping and errands and a hassle for many of the city’s residents, but for my family it was a happy occasion to set out to the starting line.

According to a Municipality statement, more than 30,000 men, women, boys, and girls participated. The Marathon website recorded about 17,000 runners in the competitive 5, 10, 21, and 42 kilometer races. The overall age range was vast, with about 140 runners aged 70 and above, most of whom registered for the 10K race, and nearly 1,000 runners below age 15, of whom about 900 registered for the 5K race. The runners included children, elderly, and every age in between, but the largest age group – numbering 3,500 – was 15-19 years. These were easily identifiable among the runners: high school students, soldiers, and many young Jewish visitors from abroad. Each of the other age groups had fewer than 2,000 runners.

Men accounted for 63% of all runners in all the races. The highest participation rates for women were in the 5K (where they accounted for 49% of the runners) and 10K (42%) races.

The most popular of the races was the 10K, in which 8,000 men and women participated. This distance was especially popular among the 15-19 year olds, who totaled 2,200. Apparently the 10K is characteristically a young people’s race. So how about the longer races?

It turns out that the longer distances, which require a great deal of mental stamina, actually attract older runners. The largest age groups for both the 21K and full marathon were the 40-44 and 45-49 year olds. In each of these age groups, 800 runners participated in the 21K and 270 ran all 42 kilometers.

This year too, it was a wonderful experience to run with my family (4 people in 4 different age groups) and thousands of other runners throughout the streets of Jerusalem.