Main Blog Within your Walls

The population of the Jewish Quarter is reliably young with about half the residents (55%) aged under 25. However, the number of people in this age group has been decreasing over the past twenty years, for in 1997 it was almost two-thirds (63%) of the population. 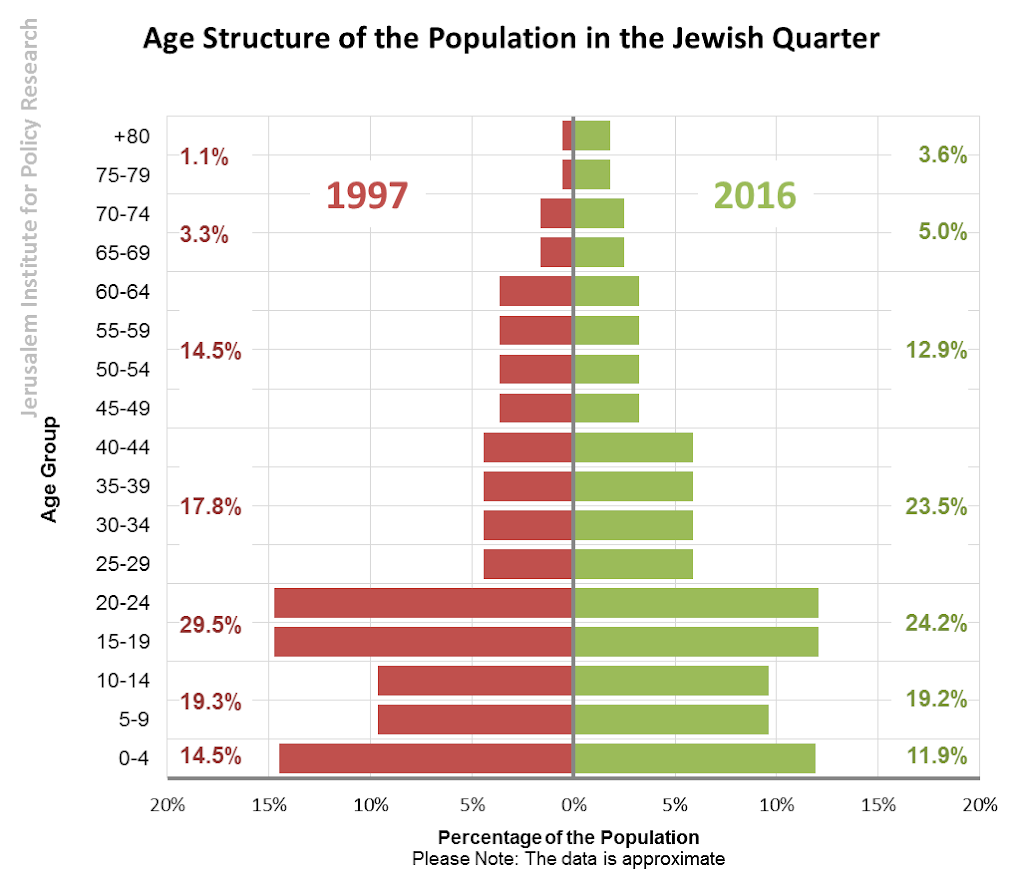 Lack of accessibility, unbearable noise pollution, and community life and an ideology that make it all worthy – these sum up the character of the Jewish Quarter in Jerusalem’s Old City.

The physical conditions in the Jewish Quarter, such as the alleyways, the paving stones, and the numerous stairs, the acute lack of parking spots (while those that do exist are far from the homes), and above all the non-stop noise – either from festivals or groups of local or foreign tourists – might dissuade some of us. But if you ask the people who live there, they will tell you that it’s all worthwhile.

From a population that decades ago included a wide spectrum of religious streams, Haredim, and even secular people, today only a negligible minority is not religiously observant, while the Haredim represents half the residents. They belong to the “Zilberman” stream, and combine Haredi dress style with a Zionist worldview, a unique type of Torah study, and residency in the Jewish Quarter motivated by religious and Zionist ideologies. Alongside them live the National Religious, the National Haredim, and a sizeable number of Jews from outside Israel.

The population of the Jewish Quarter is reliably young with about half the residents (55%) aged under 25. However, the number of people in this age group has been decreasing over the past twenty years, for in 1997 it was almost two-thirds (63%) of the population. During the same period there was an increase in the 25- to 44-year-old age group (from 18% to 24%), as well as among the 65+ age group, which rose from 4.4% to 8.6% of the population . This data includes the many yeshiva students, which influence the distribution of the population into age groups.

Each and every resident named the same issues as the most problematic: parking, accessibility by car or bus, and the various festivals that disrupted life in the neighborhood. They also claim that the neighborhood is perceived as a tourist attraction, saying that the municipality does not concern itself with the residents’ quality of life, as it does in other neighborhoods. The exorbitant rents and cost of living contribute to this feeling.

In that case, what is it that draws people to the Jewish Quarter? The answer is the community, the social and charitable institutions, the vast courtyards, the strong feeling of personal safety, a childhood like no other, and of course a dwelling place on the cusp of the Temple Mount.

This comment has been removed by a blog administrator.