Workers of the World Unite?

Workers of the World Unite?

The Histadrut Klalit, or the General Federation of Laborers, was founded in 1920 and set the stage for other workers’ union to form. The purpose of these unions remains to protect workers’ rights, take measures to improve employment conditions, and conduct negotiations over collective agreements. 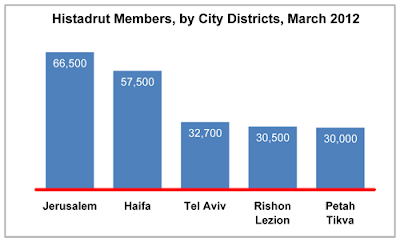 The Histadrut Klalit (General Federation of Laborers) was established in 1920 as a cornerstone of the path to statehood, and to this day it has remained the largest workers’ union in Israel. In 1930, Histadrut Ha’Ovdim HaLeumit (the National Labor Federation) was also established, and in 2007 yet another workers’ organization, named “Power to Laborers,” was founded after criticism was voiced about the functioning of the Histadrut Klalit. The purpose of these workers’ unions was to protect workers’ rights, take measures to improve employment conditions, and conduct negotiations over collective agreements.

According to data of the New Histadrut Klalit (from March 2012), the organization has a total of 660,187 members. The Jerusalem region has 66,537 registered Histadrut members, constituting 10% of the total membership. This percentage is double the figure for the Tel Aviv region (5%) and Rishon LeZion region (5%) – a discrepancy that we can probably attribute to the higher percentage of public-sector workers in Jerusalem compared to these cities. The portion that the region of Haifa, known as the “City of Laborers,” contributes to Histadrut membership is comparable to that of Jerusalem, at 9% of all members.

The Histadrut comprises several professional unions. The largest union is the Union of Local Authorities (15% of Histadrut membership), followed by the State Employees’ Union (12%), and workers in agriculture, chemistry, and security (9%). In contrast, professions with the lowest unionization figures include those engaged in creation and expression (1 Histadrut member), communications workers and artists (3 members), and dental hygienists (7 members). The data indicate that 71% of Histadrut Klalit members were born in Israel, while 20% are long-time immigrants and 9% are new immigrants. Distribution by age indicates that 24% of Histadrut members are young people up to age 34, while 52% are in the 35-59 age range, and 19% are 60 and older.