In the meeting we learned about the problems, challenges and difficulties in opening the school year in East Jerusalem under the cloud of COVID-19. We heard about several issues: how did the shutting-down and re-opening of schools affect youth in East Jerusalem? How does remote-learning work in a world without the Internet? How many pupils actually physically returned to their school? What about drop-outs and the so-called “Zoom” drop-outs? And what became of the curriculum and matriculation exams (both Palestinian and Israeli)?

Zion Regev, who is responsible for the five-year plan in East Jerusalem on behalf of the Jerusalem Municipality Education Administration, presented (Hebrew) its situation-room data regarding COVID-19, focusing on East Jerusalem data – keeping track daily of rates of morbidity and quarantine, and chains of infection among pupils. Regev explained that the ties between the Jerusalem Municipality Education Administration, the Ministry of Education and the schools in East Jerusalem were strengthened during the pandemic. He further explained that the infection rates in East Jerusalem schools were relatively low, not dissimilar from those in West Jerusalem, despite the density and the difficult conditions in some of the Arab neighborhoods. Regev attended the discussion with his team members – Rina Goldfeld and Rina Abed-Al-Rachman. 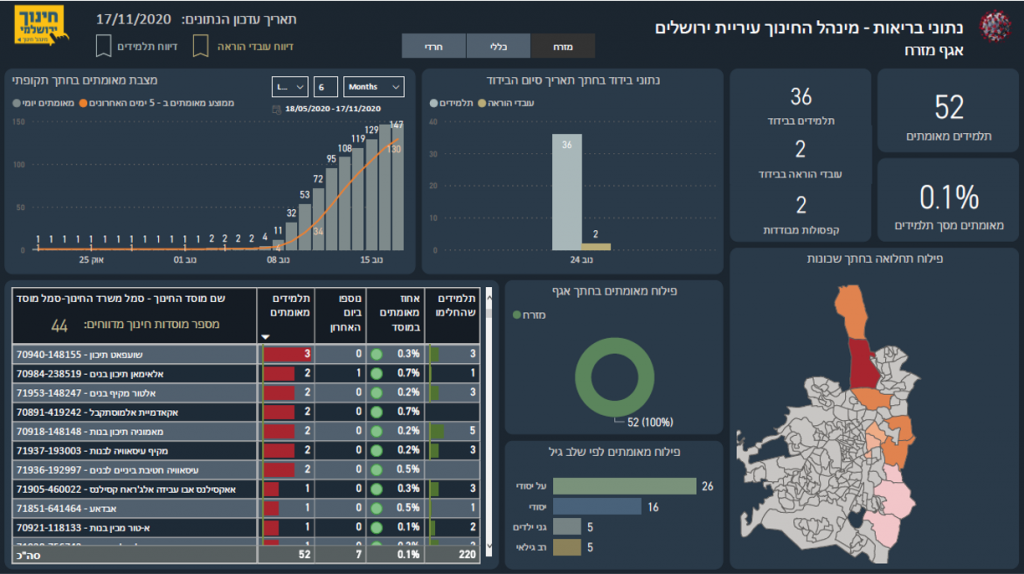 Dr. David Koren, who manages the educational five-year plan in East Jerusalem on behalf of the Ministry of Education, together with his team members – Omri Kupperstein (manager of information and data) and Neta Hazan (manager of community and public relations) presented the team’s work in implementing Government Decision 3790. The team presented (Hebrew) encouraging – even ground-breaking – data regarding the participation of East Jerusalem pupils in activities held prior to the pandemic, in line with the government decision. It was the COVID-19 outbreak that naturally blocked continuation of most of these activities.

The government decision included investment in funding and development efforts in moves such as informal education activities. Before the government made its decision, there was no evaluation of such informal educational activities in the east of the city, but some 200-300 children were estimated to have taken part in such activities. During the 2019/20 school year, prior to the outbreak of the pandemic, some 24,500 pupils benefited from enrichment activity and informal training. On the importance of informal education in reducing social gaps, see more here.

Previous events in the series