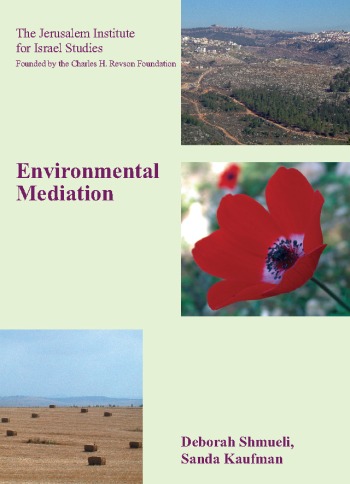 Mediation is often used concurrently with other modes of conflict management. Some current challenging issues for environmental mediation include: the production and communication of technical data to lay publics, especially concerning risks; mediator training and evaluation; approach to conflicts that are resistant to resolution; the timing of intervention; and whether agreement should be sought in all cases. Attention is also given to the application of environmental mediation techniques in Israel.

Conflicts within and between tribes, religious sects, ethnic groups, and nations have been handled both peacefully and otherwise from the beginning of history, and — in many cases it seems — with third party intervention. Some mediationlike processes far pre-date formal court procedures, and some cultures have quite a remarkable tradition that survives in parallel with other, more formal conflict management and justice means. Nowadays, in some countries where justice meted through the court system is extremely slow and may take up to several years for a hearing (e.g., Argentina, Mexico, the United States and, more recently, Israel), mediation has come to be seen as a viable alternative to courts for resolving civil cases.

Conventional dispute resolution is often entrusted to the legislative branch (by vote) or the judicial system (by law), or to an administrative arena where decisions are made according to some technical expertise. When legislative action and administrative rulings are disputed and result in court action, the focus frequently centers on technicalities of law and procedure, rather than substantive issues.

The frequent dissatisfaction of the parties when disputes are settled through these traditional channels has led researchers and practitioners to explore alternative dispute resolution methodologies to supplement conventional systems. In recent years, scholarly attention has begun to focus on the use of social scientific knowledge to develop methods for resolving conflicts. Substantial literature also addresses the application of these methods to environmental and public sector disputes. A synopsis of some of the basic differences between the conventional and alternative approaches to dispute resolution is summarized briefly in the document. As with many synopses, these characterizations are true sometimes, but not always, and not along all dimensions.