Main Publications The National Budget and the Environment 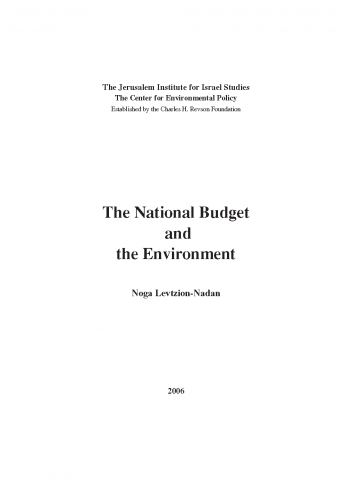 This research project analyzes the national budget in terms of environmental issues and presents some conclusions regarding the way in which different government ministries are budgeted and the ways in which their budgets are utilized.

The research shows that the vote on the budget at the beginning of the year does not reflect the activities of the government in the environmental arena, and that discussion and change of the budget continue even after the voting ends. While the budget appears highly detailed and transparent, technical problems and redundancies make it and its significance difficult to comprehend, creating a wide gap between the proposed budget and its execution.

1. The budget and its clauses are the technical, numerical expression of the substantive problems in the areas of government authority and responsibility.

a. Both the budget and actual expenditure regarding water grew in real terms since 1999.

b. Both the budget and the actual expenditures grew for the prevention of air pollution, environmental education, international relations, and other areas of expenditure of the Ministry of Environmental Protection.

c. The budgets for drainage, disposal of solid waste, the preservation of biological diversity, and the support of environmental organizations all grew, but actual expenditure shrank.

d. The budget for subsistence agriculture shrank, but the actual expenditure grew. e. Budgets were cut for the treatment of sewage, dangerous chemicals, support for industry, the reduction of noise and radiation, and landscape protection — and their real expenditure also shrank

4. The splitting of budgets and the division of authority among different ministries do not allow for a broad view of a given field and confound attempts to formulate coordinated policy. The fragmentation of administration increases costs and may damage communal interests.

Solutions that would have been less expensive if there were a unified authority seem more expensive because of the duplication of costs to the different bodies involved. In the case of water management, for example, the distribution of authority among different regional councils prevented the implementation of a unified policy and affected the willingness of different sources to invest in solutions that would have been unquestionably cheaper — such as improving sewage treatment — had there been a single governing authority. Instead of clearly less expensive options, more expensive ones have been chosen, such as desalination of sea water.